I have posted here before on the canal street page and through I would put up a dedicated page and see if any one was able to help find out some family information regarding my recently deceased dad James Maher - Also known as Marvin.

He lived with his extended family the Wainright's in 22 Canal street with his unmarried mum Elizabeth Maher (lizzy) who was a ships cleaner at the time, her mother was Mary McDonald and father was Joseph Maher. My dad was born in december of 1945 2-3 months prematurely (so we are told). After leaving school he was an apprentice for one of the local building companies and played in several bands in the area as a drummer. I have recently been trying to find out who his father was was fortunate enough that he took a DNA test on the geanology websites before he passed away - however it does not really bring us any answers or any closer to knowing anything about who his father would have been although it does throw up lots of names that we do not recognise in the family.

The family where always very tight lipped about this and it was never discussed but I am sure there is someone out there who would know the real story. Does anyone recognise anyone in the pictures and would have any thoughts or ideas ? I know many many people knew her husband Arthur - based on the amount of people that wanted to come to his funeral it would appear he also had a story that we didn't really know - so I'm sure someone who knew him may even know the truth.

He went to St Winefrieds SM Boys around 57/61,and when he left he worked as an apprentice for Tysons Builders as an apprentice bricklayer studying at St James for night school and Bootle Tech college finishing up around 65. After that he worked in the stock office of Kirby car sales for 3 years. 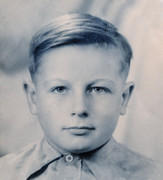 Hi Stephen, the only birth in Dec 1945 in Free BMD James Maher mother Maher was in Hammersmith London. Could this be him? Do you have a copy of his birth certificate, if yes, does it say Father unknown? T.S
Top

HI Teens could it have been a late registration ie march 1946?

There is a marriage recorded in 1912 Joseph Maher and Mary Mcdonald, a birth was registered in 1915 of an Elizabeth Maher are these the right people???
Lily
Top

lily8 wrote:There is a marriage recorded in 1912 Joseph Maher and Mary Mcdonald, a birth was registered in 1915 of an Elizabeth Maher are these the right people???

Hi Lilly - yes - Mary & Josepth where her parents, she also had some siblings Mary, Margaret, Maria, Norah. She shared a property in canal street with various cousins, one of them was the wainwright family. The details that you have listed are all correct.

Thommos sister wrote:Hi Stephen, the only birth in Dec 1945 in Free BMD James Maher mother Maher was in Hammersmith London. Could this be him? Do you have a copy of his birth certificate, if yes, does it say Father unknown? T.S

Hi - yes I do have the birth certificate in place of the fathers name it just has ----- nothing else. I've heard some recent stories that he was "military" and would certainly local to the area when back from which ever services he was part of. I have had DNA tests does but its almost impossible to work out from that. I'm hoping that I can jog someones memory and maybe a name will fall out that will match the DNA tests somewhere.

I can only wish you the best of luck and hope that someone can help, being war years may make it a bit easier to eliminate males that were in the forces or merchant marine best wishes.
Lily
Top

Hey, sorry if this posts twice !

My search for my dad's father and my grandad continues. We've nothing conclusive yet but with the power of DNA there are some leads. Through a mixture of searching and following the family trees of distant relatives that I have found through DNA research we have really only come up with one name that appears to be in the right place at the right time and the the family tree appears to match with the some of the names that I have verified are related more distantly. If you have a moment could you have a look at the tree in the picture. I'm looking to trace family of George Cahill, born sept 1926, possibly lived in Portland Gardens in 1945 before moving out of the area - we did hear that he did a runner ! I cannot find any trace of him having any further legitimate children so I'm looking for anyone who would know any of the blood line relatives of the Cahill family. DNA is a great tool so finding a male from that line would mean I could put this to bed or we can let him off the hook

Is there names that seem familiar to anyone ? Hoping for some luck, cheers

Hi Stephen I have managed to trace the Cahill line that you have followed, Marriage sept q 1922 Ethel Pinkstone and Phillip J Cahill, birth 9/9/1926 registered dec q George Cahill MMN Pinkstone no other births appear Cahill/Pinkstone so perhaps an only child?. 1939 all three living at 21 Somerset Road Crosby. Assuming George stayed in the Liverpool area two possible marriages sept q 1945 to Herrity and sept q 1953 to Kenny. Without siblings and also without a hard copy of marriage cert it is difficult to speculate, perhaps you could get some assistance from the Cahill family if not I would apply for the marriage certs they at least will list his father and his occupation which was a mechanic. From there we could trace any of his children from marriage. Sorry not to have helped much good luck with it.
Lily
Top