My pleasure Matt, i hope you get it sorted soon.

The explosion of the SS Malakand.

It was the strategic importance of the docks which made Liverpool such an important target for the Luftwaffe. Liverpool was the main port for convoys crossing the Atlantic from the free world.
Throughout the Second World War, the Mersey was full of all kinds of ships, both military and merchant. Vital food supplies came into Britain through Liverpool so if the port could be closed, Britain might starve. As well as bombs, mines were parachuted into the Mersey to disrupt shipping. These, as well as unexploded bombs, caused great disruption long after the bombers had left Merseyside’s skies.
Built in 1919, the SS Malakand cargo liner was part of the Brocklebank shipping line, named after the Malakand area of the Indian sub-continent. 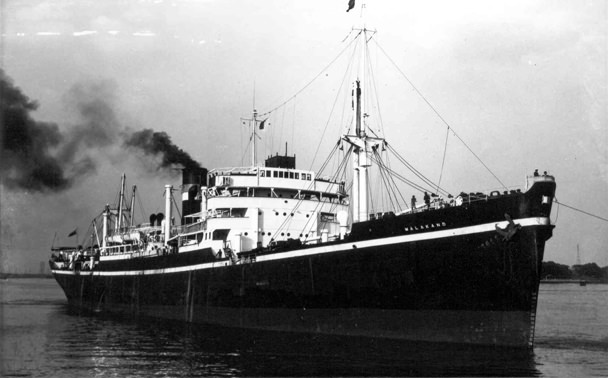 On the worst night of the Blitz on Liverpool, 3rd May 1941, SS Malakand, loaded with a thousand tons of munitions, caught fire, blew up and obliterated the Huskisson Dock. It is thought that a drifting barrage balloon landed on the deck and burst into flames.
Pieces of the ship were blasted over two miles away causing even further damage to the Overhead Railway. Half the docks were temporarily put out of action as a result of the destruction caused by the blast. Thousands of dockworkers, troops and volunteers were involved in the clear up. Miraculously, considering the size of the blast, only four people were killed.

During a dry-docking in Portland, Oregon, in 1991, asbestos was discovered in the DAWN PRINCESS with the result that the vessel was out of service for three months whilst it was removed. In 1992, P&O Cruises stated that the DAWN PRINCESS (ex SYLVANIA) 'no longer fits into the Company's modern fleet', and in 1993 she was withdrawn from service. She was purchased by Happy Days Shipping and on 18th August 1993, she was renamed ALBATROS, on charter to the German tour operator Phoenix Reisen.


An ambitious programme was planned for the ALBATROS which included an annual 100-day world cruise. On 30th May 1995, when the vessel was sixty miles off Yanbu in the Red Sea, a flash fire broke out in the engine room. The blaze was quickly extinguished, but the boilers were shut down as a precaution. The ALBATROS eventually reached Jeddah where her passengers were landed and flown home on chartered flights. The ageing liner was towed to Marseille for repairs which took until 26th July 1995.

As the ALBATROS, the SYLVANIA returned to her
original home port of Liverpool on 13th May 1997. 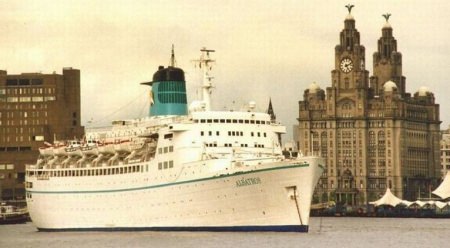 Joe, I thought I’d seen Albatross before. Here she is in Valletta, Malta , last year. Ken 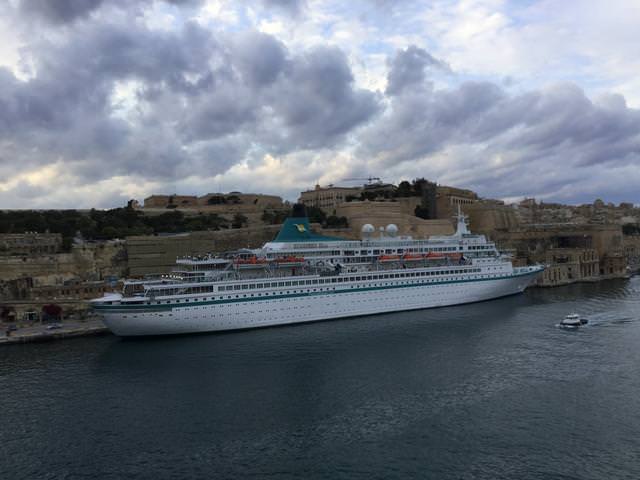 Cheers Joe. Built by Wartsila in Finland , she used to ply the Helsinki - Stockholm route as Royal Viking Sky.
I did that trip many times in my working days and the Viking ships used to berth right next to our HQ in Kanavaranta, Helsinki.
Regards
Ken
Top

Thanks for that info, Ken.

The MEDIA embarking passengers at the Princes Landing Stage, Liverpool.
Astern of her is the Anchor Line's CILICIA 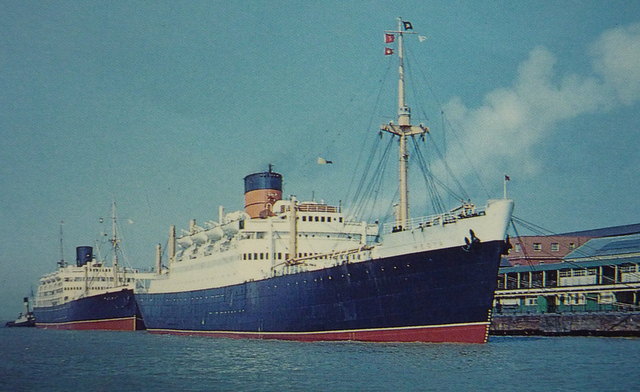 The MEDIA at the Cunard berth in Liverpool's Huskisson Dock 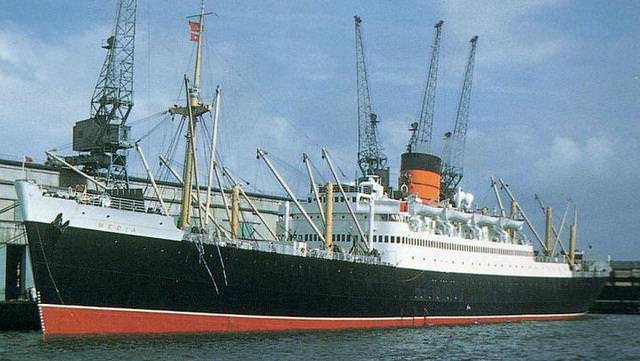 My very first job was as galley boy on this ship. I was six feet tall on leaving school and the bulkheads were 5' 8" so I only lasted week, drew my wage of 12s 6d and came home with a very sore head.

The second video on this you tube page might also be of interest and is well worth watching.
Top

Loved the Panama Canal incident film.
One of the best cruising experiences going through the Canal. K
Top

Hi Ernie not nitpicking honest but bulkheads are the side or dividers "walls" on a ship, deckheads is what
you kept on banging your head on

We had the tallest man in submarines when I was on the Orpheus...6' 10" poor guy he had a permanent scar
right on the top of his bonce and they had to alter the design of the sub a little because our bunks were only 6 feet long
so they built him a special bunk but it used to be chained up to the starboard bulkhead in the after torpedo space when not being used.
Matt
Top

Not nit picking Matt....educational. I am always glad to learn and every day I learn something new,

I am pleased to find I didn't bump my head on the bulkheads after all but also realise why my short time in the MN yielded little to benefit my education .
Top

Thanks Ernie,somehow I just could not imagine you running head first into the sides(bulkheads) of
the Conway.

North broadcasting from the MV Fredericia located off the coast of Ramsey, Isle of Man. 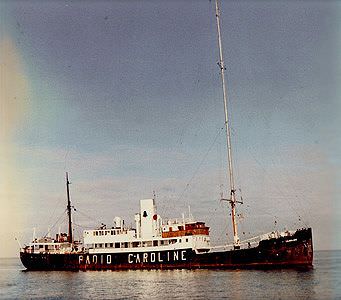 England's answer to radio Luxembourg. Thanks for posting, Joe.

Anyone seen anything like this? Ken
I saw it in the Channel through binos but couldn’t get a pic. It’s currently off Littlehampton in West Sussex.

Here you are Ken.Not many of its type.

Thanks Matt.
Biggest Sea Wind Farm in the World off our South Coast so plenty of work for her.
Regards
Ken
Top

Thanks for all your info, photo and comments Phil, Ken and Matt.

Somehow i can't find the name of this one, another senior moment. 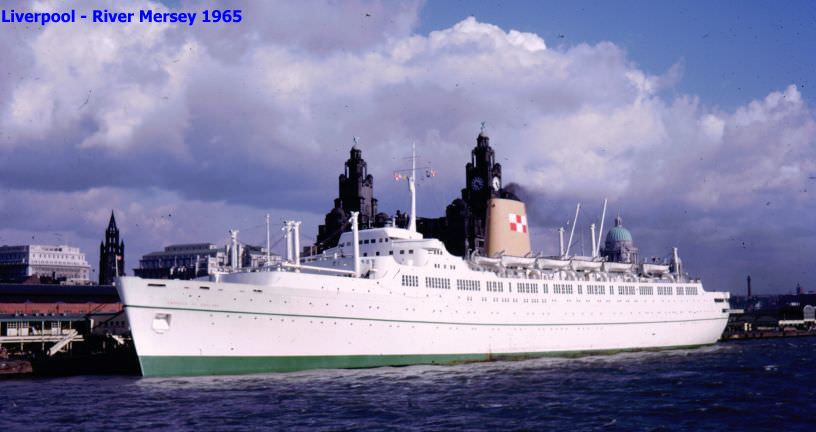 River Mersey Ferry Trip Scenes: The RMS EMPRESS OF ENGLAND moored up at the Liverpool Pier Head Landing Stage in 1965 with the Royal Liver Building behind (Pierhead landing stage = Liverpool landing stage = Princes Landing Stage). The Empress of England was built in 1956-1957 at the shipyards of Armstrong Vickers, Newcastle, England by the Canadian Pacific Steamship Company for the trans-Atlantic run from Liverpool to Montreal, Quebec, Canada.
Last edited by fatboyjoe90 on Thu May 31, 2018 7:21 pm, edited 1 time in total.
Cheers Joe.
Top

Thanks for that Ken, I've just the found the documents for her.

Loved the Empress boats Joe. My Dad would take me down when they were in. K
Top

Before we moved to Netherton we lived on Irlam Road, the dock road was our playground. If mobile phones were going then we would've had all those wonderful photos of the overhead railway the garters the steam wagons and all the free fruit amongst all the freebies we could put our hands on.

I too loved the Empress ships. Being a bit spoilt, and a dad's girl, I used to get taken on board when they were in dock. I thought they were ENORMOUS looking at that photo, they weren't really were they.
Top

Large in their day Lynne but not by modern ship sizes. Very elegant though.

One for Matt, Submarine sinking in Liverpool bay 1939 with the loss of 80 souls. 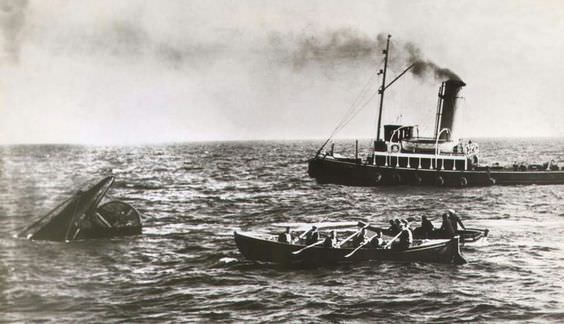 Mountwood Ferry 1963, in pack ice on the Mersey. 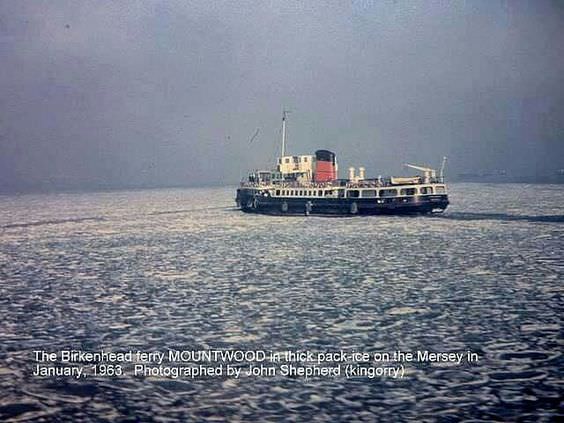 About the Thetis .Joe. Not one of the extra 50 sightseers on board her had ever had even one second of safety training in case of ANY type of emergency.Also there happened to be a German Navy crew trained in submarine rescue but the R N refused their offer of help because the Thetis was the latest of the T class sub's and WW2 was about to come to a head..A lot of those people could have been saved but she dived with her torpedo bow cap doors open

and not one the 5 watertight compartment doors closed completely disregarding all safety regulations.
Matt
Top

Thanks for your reply Matt, it was very informative.

Empress of Canada at Liverpool, her final visit, 1971. 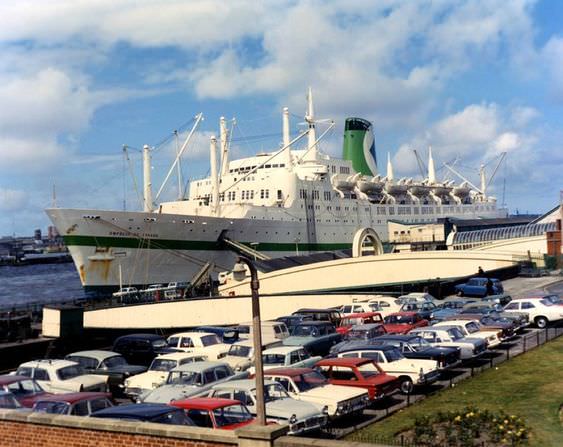