The Development of Liverpool Docks 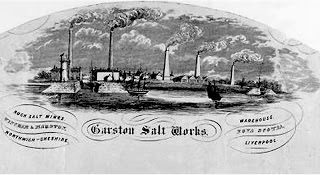 Garston Salt Works circa 1800s
It was Liverpool’s role in the early development of railway technology which resulted in the parallel setting up of docks at Garston, established as an unloading point for coal. Garston Dock mushroomed from a very small dock enterprise which had originally been built in south Liverpool for Blackburne’s saltworks. It was when the St Helens Canal and Railway Company extended its track system and needed extra provision of coal that the Garston Dock proper, covering six square acres of land, was built. The idea behind the dock was to offer loading and unloading facilities which would enable the St Helens coalfields to compete with rivals in the Wigan area - and a target of loading 250 tons of coal in 2.5 hours was set. However, larger ships struggled to reach the dock and more money had to be pumped into the project to facilitate their passage. 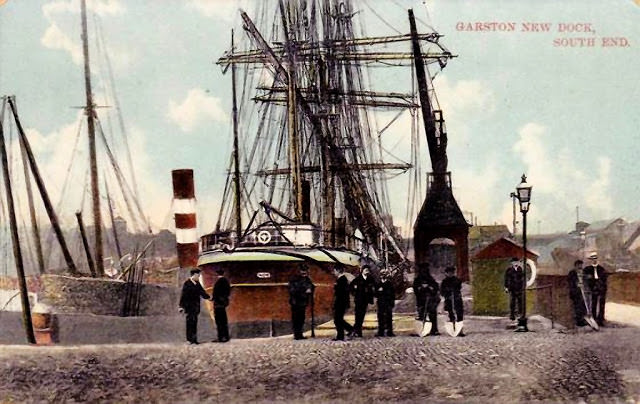 The spiralling population of Bootle was in itself the result of the docks being created. although it proved to be something of a poisoned chalice. Though the population and the resultant prosperity of Bootle increased, it was the existence of the docks which made Bootle a prime target for bombing during the May Blitz of the Second World War to such an extent that it was the worst affected town of its size anywhere in Britain. 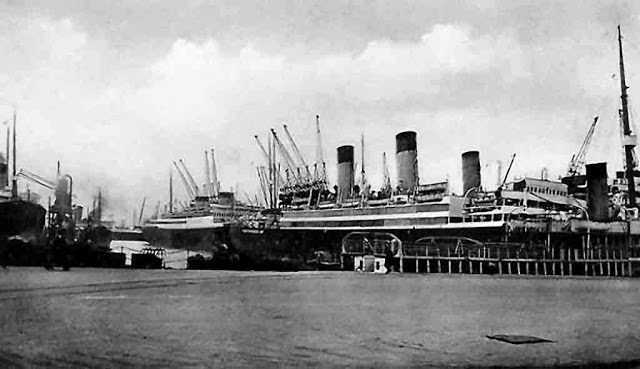 In the early 1800s, Bootle was home to only a few hundred people. Once the first Bootle dock - the Canada Basin - had opened - more and more people began to settle in the suburb as a result of the spin-off employment opportunities. By the time of the 1861 census, Bootle's population was 6,414. Within the next two decades, the opening of the Alexandra and Langton Docks had continued the population boom - and the Gladstone Dock system, begun in 1906 and completed in 1927.

The London and North Western Railway Company leased part of the St Helens Railway in 1860 and took it over completely four years later by 1870 a new rail link with Wigan had opened, directly connecting the Wigan coalfields with Garston Dock. The implication of this was the addition of the Garston North Dock in 1875 and together with other refinements, Garston was eventually equipped to take almost half of all coal coming into Liverpool.

The Albert Dock, designed by Jesse Hartley and Philip Hardwick, it was opened in 1846 and was the first structure in Britain to be built from cast iron, brick and stone, with no structural wood. As a result, it was the first non-combustible warehouse system in the world. At the time of its construction, the Albert Dock was considered a revolutionary docking system because ships were loaded and unloaded directly from/to the warehouses. Two years after it opened it was modified to feature the world's first hydraulic cranes. Due to its open yet secure design, the Albert Dock became a popular store for valuable cargoes such as brandy, cotton, tea, silk, tobacco, ivory and sugar. However, despite the Albert Dock's advanced design, the rapid development of shipping technology meant that within 50 years, larger, more open docks were required, although it remained a valuable store for cargo. 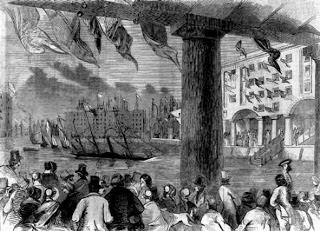 While Liverpool Town Council took the helm over the running of the docks in the earliest years, via a special docks committee, rapid expansion soon necessitated the creation of a separate administrative body. The Mersey Docks and Harbour Board took control of the lower Mersey in 1858, also taking responsibility for the Birkenhead Docks and the Herculaneum Dock Company. One of the few docks to remain outside the jurisdiction of the MDHB was the London and North Western Railway Docks at Garston. Building the Canada, Herculaneum and Waterloo Docks, as well as those at Birkenhead, was among the top priorities for the new body. But general upkeep of the river was also part of the Board’s remit - and tasks included dredging, salvage, surveys, piloting and the provision of lighting and buoys. The Board also started to improve conditions for seafarers by embarking on a programme of lighthouse building and by the provision of lifebuoy stations. 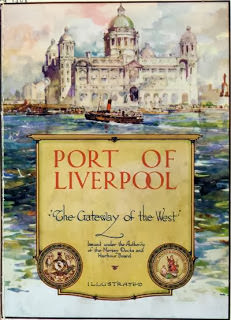 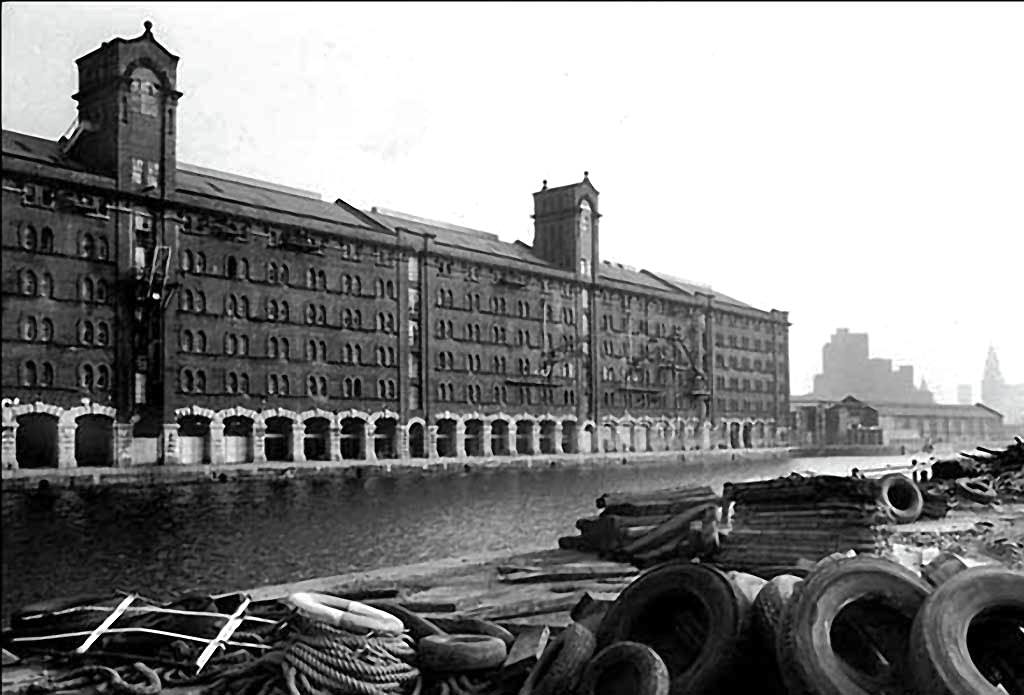 In 1948 the port radar station opened at Gladstone Dock was one of the first anywhere in the country and in the 1960s the MDHB built floating stages for oil tankers at Tranmere. There was a change of name and status in 1972, with the Board transmuting into the Mersey Docks and Harbour Company. At the back of this decision was the need for the organisation to raise money for ambitious new projects, such as the building of the new container dock at Seaforth, at the northern end of the docks network. 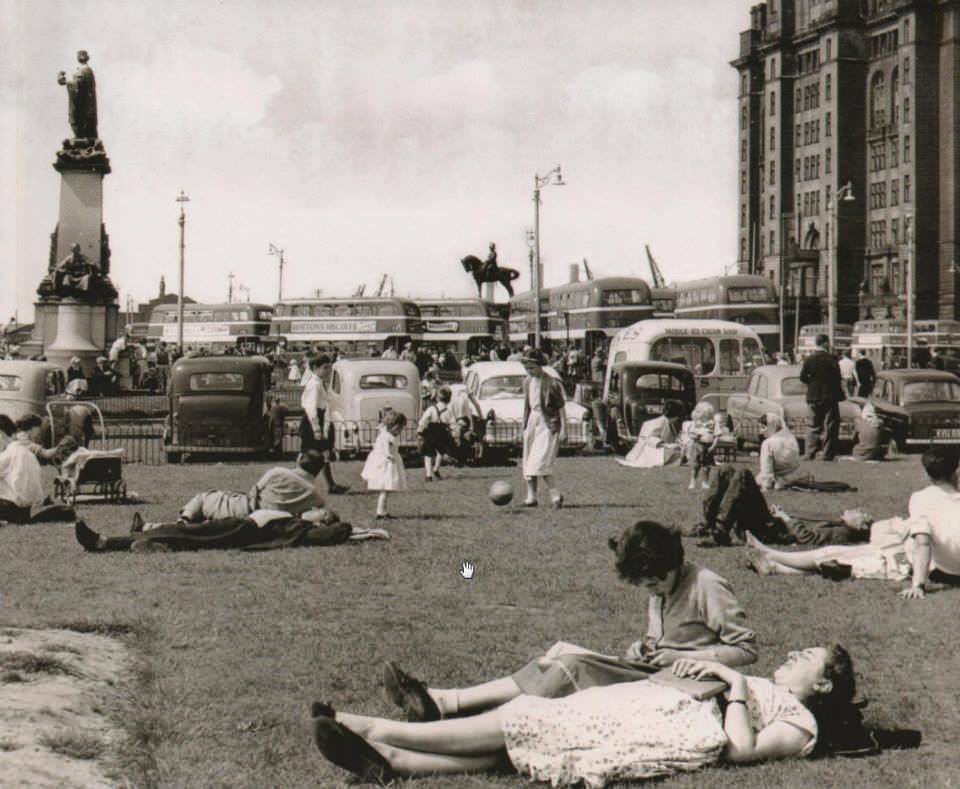 Great stuff Joe about the MDHB.Sheila's dad worked on the dredgers as the dredge bucket operator
from the end of WW2 until 1982 when he retired.His dredger was nearly always the one that found
the unexploded bombs. Dangerous job.
Matt
Top

Thanks for that Matt, i had a mate who worked on the dredgers he said they were still finding unexploded bombs in the Mersey in the 1980s also.

Hi Joe.16th April 1969 the dredger pulled up 2 unexploded bombs on Sheila's fathers watch.
That was the day we were married and poor Sheila's dad was still very nervous as he walked her down the aisle
at Christ the King in Bromborough.He had to have two glasses of Scotch because he was still shaking after he got home
(well that was his excuse

Matt wrote:Hi Joe.16th April 1969 the dredger pulled up 2 unexploded bombs on Sheila's fathers watch.
That was the day we were married and poor Sheila's dad was still very nervous as he walked her down the aisle
at Christ the King in Bromborough.He had to have two glasses of Scotch because he was still shaking after he got home
(well that was his excuse

efc46 wrote:Joe what memories I worked for Johnny Routledge North Mersey Iron and steel our yard was in Regents road under the bridge I have been in Australia since1967 you turned back time for me luved the photos/Davey

I'm glad that I've been able to bring back some good memories for you Davey.

Georges dock 1901 prior to liver buildings. 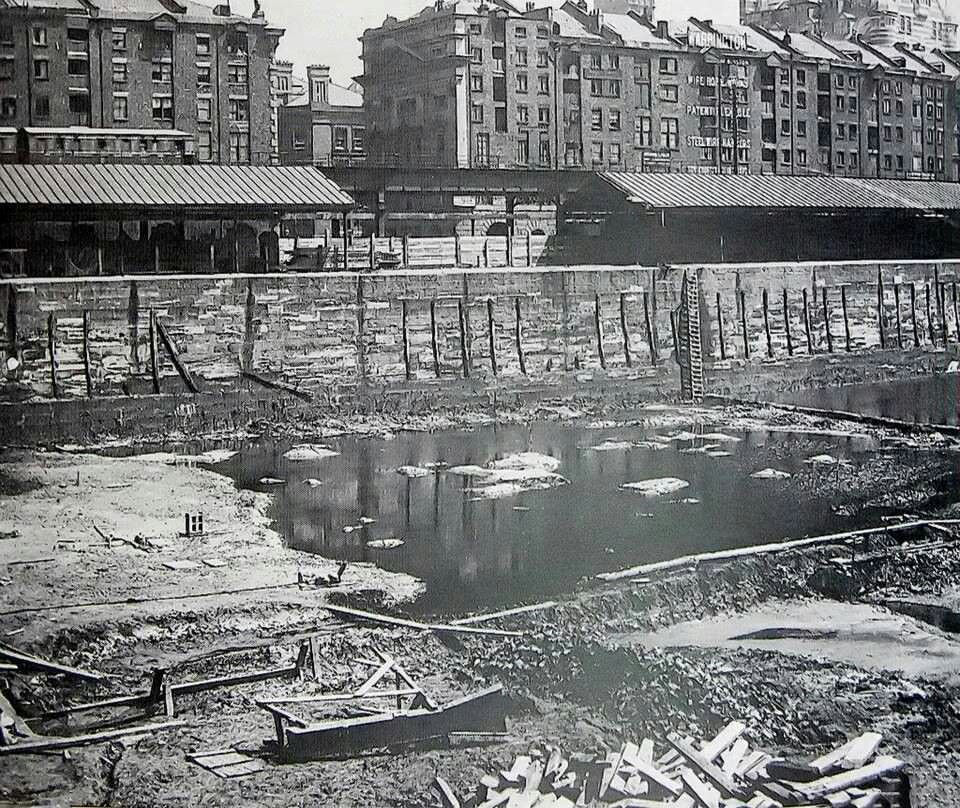 Love it, keep up the good work Joe, (on all of your threads) JJC.
Top

Thanks for your kind comments John.

Running from left to right and crossing the road is the Huskisson - Sandon & Canada Dock Goods branch. 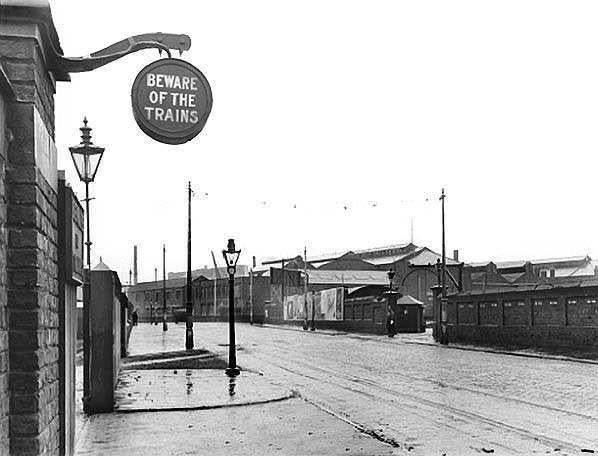 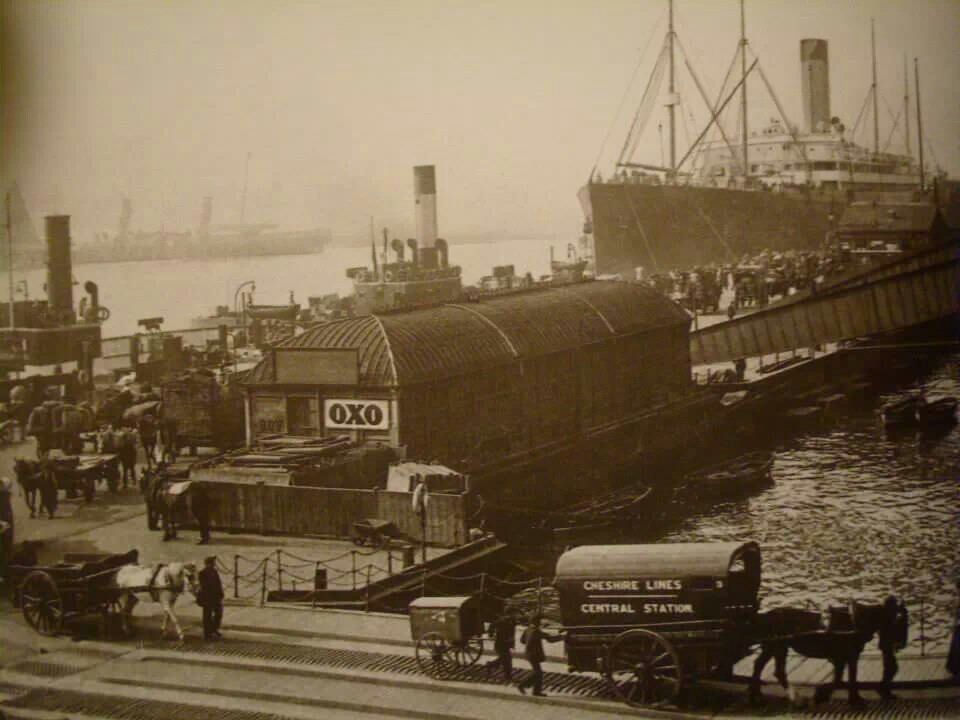 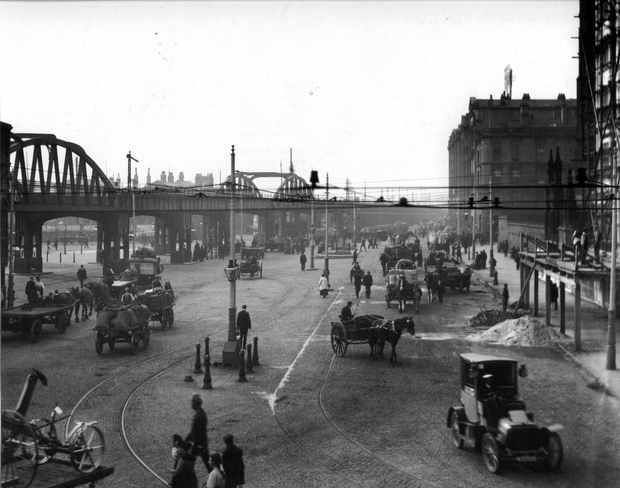 Before the Cunard Building. 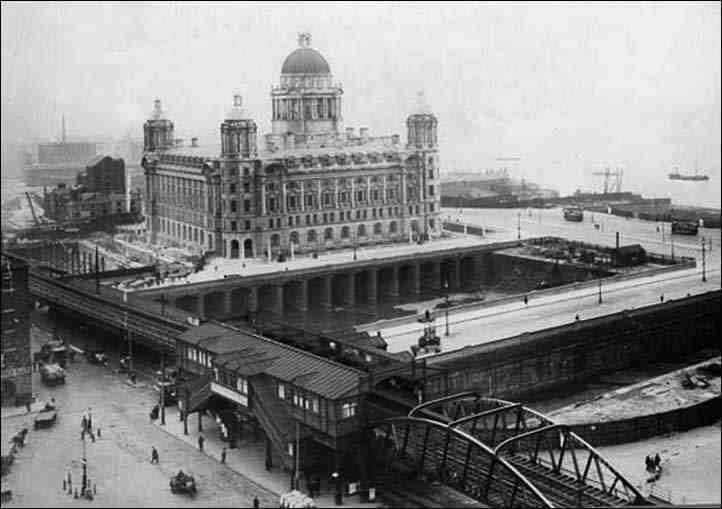 West Waterloo Dock, That big building on the left, is where Costco is today. 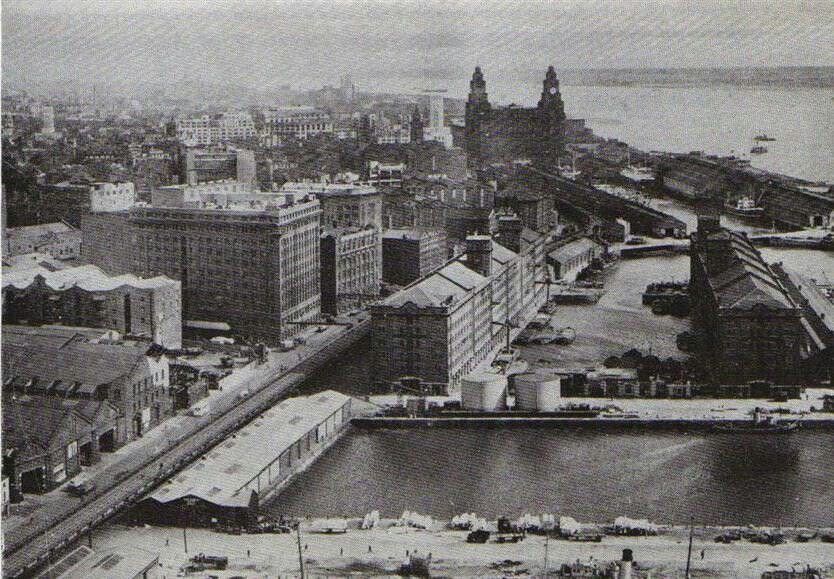 Costco as it is today. 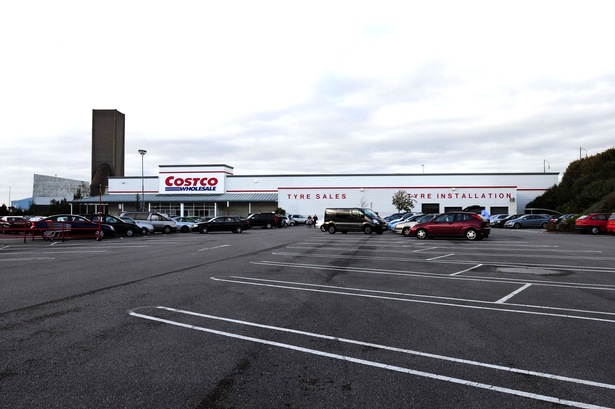 Waterloo Dock as it is today. 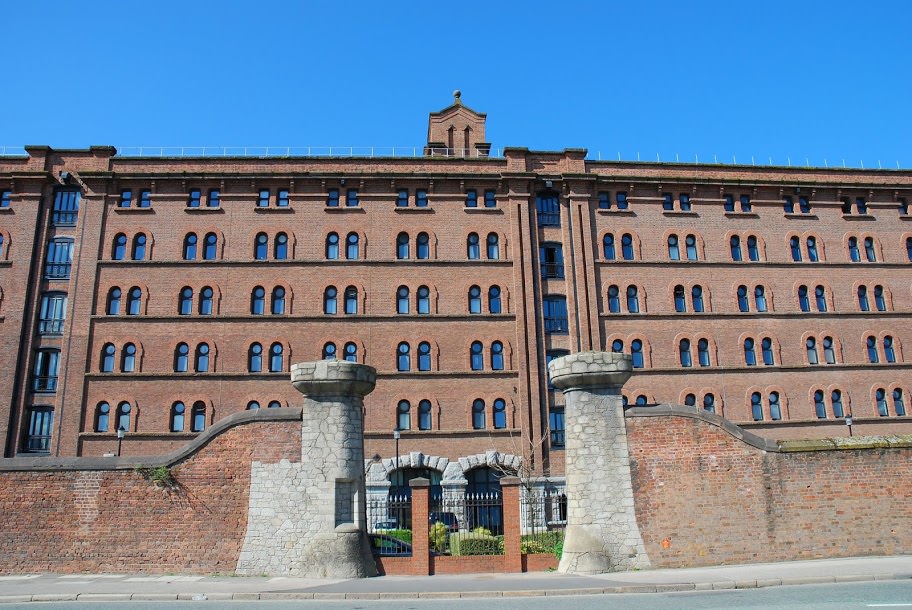 The sailing ship Kathleen & May tied up in Canning Dock, with the old pumphouse chimney in the background. 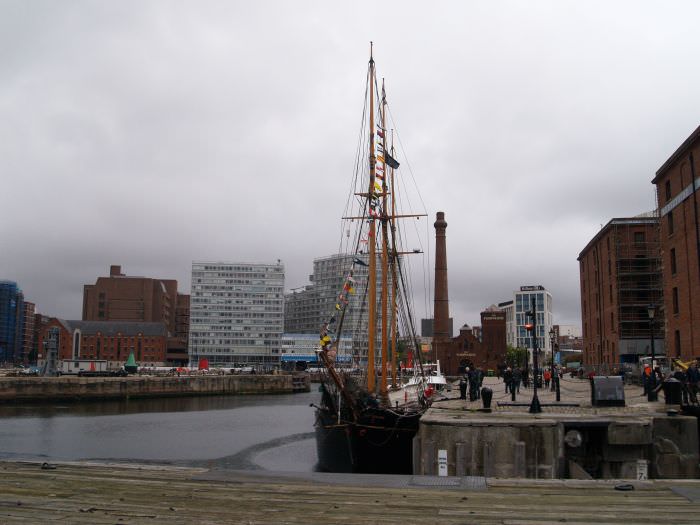 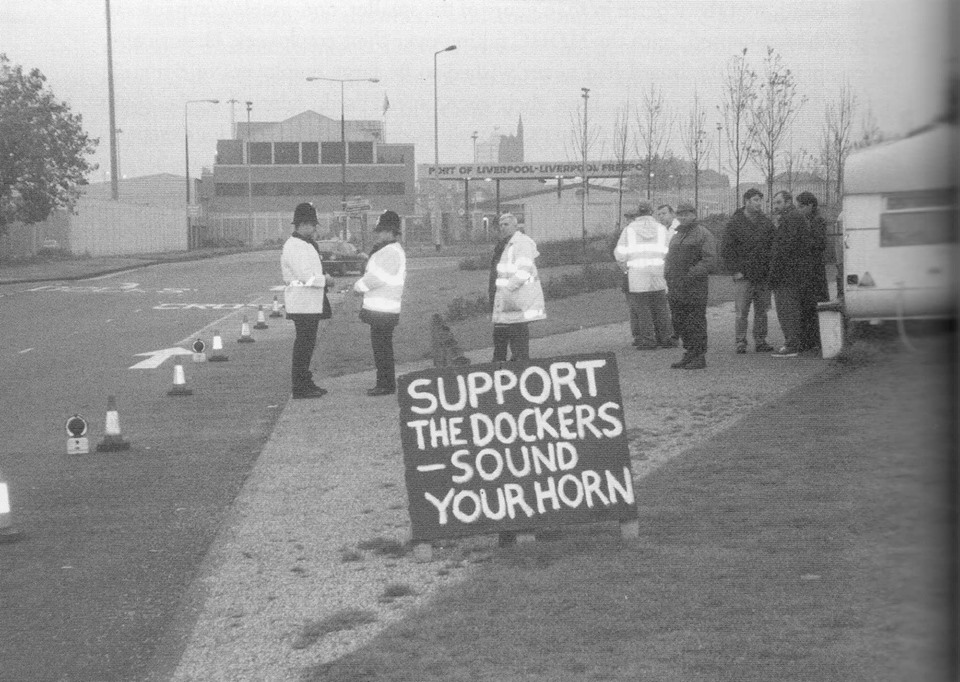 Nice one Joe.
Great to have you back. 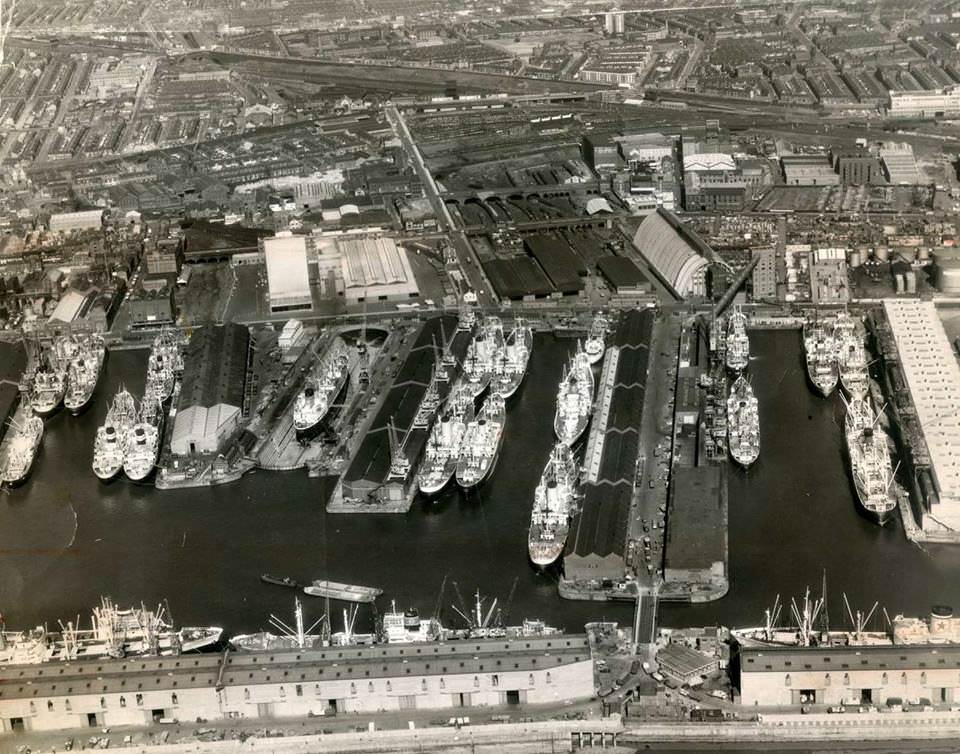 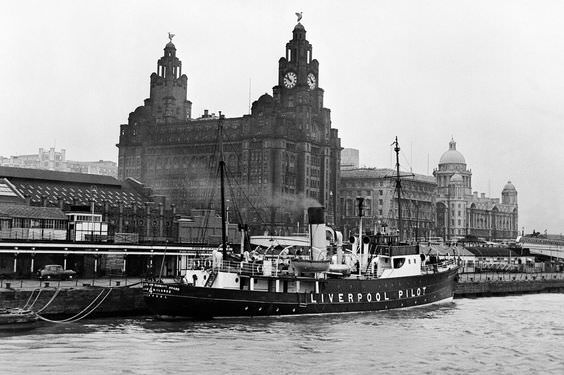 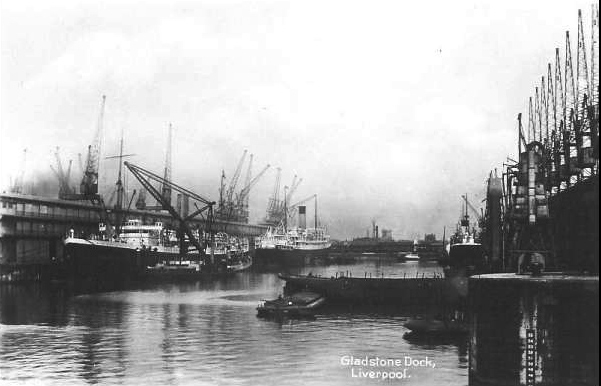 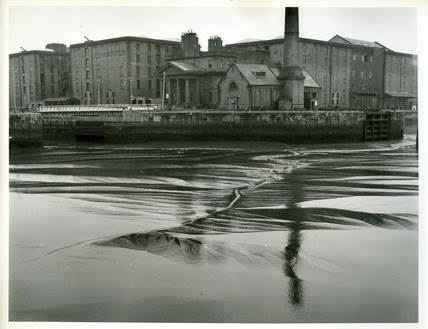 Thanks for your memories Davey. 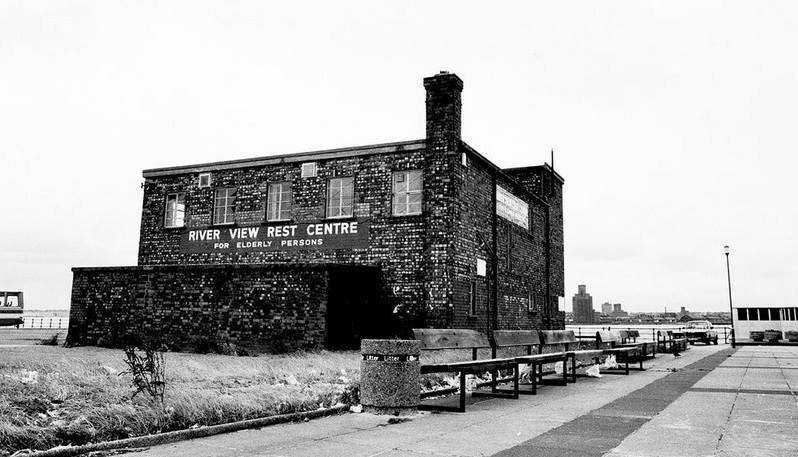 Hiya Dan, I don't know if this has been posted before if it has just let me know. 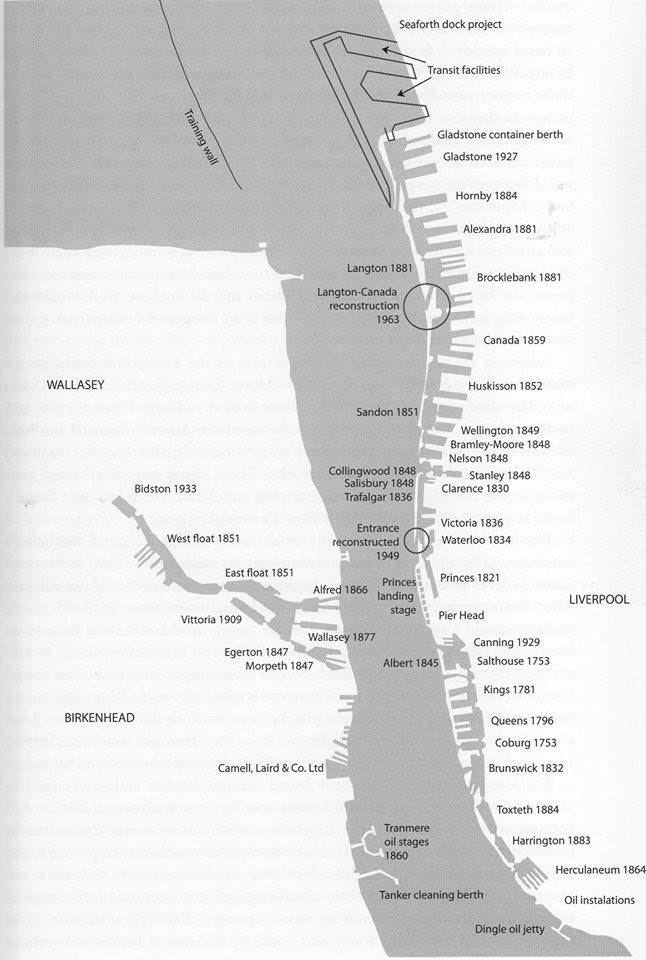 Tate & Lyle Ltd Sugar Silo on the Huskisson Dock and Regent Road.
Notice the Overhead Railway is still there. 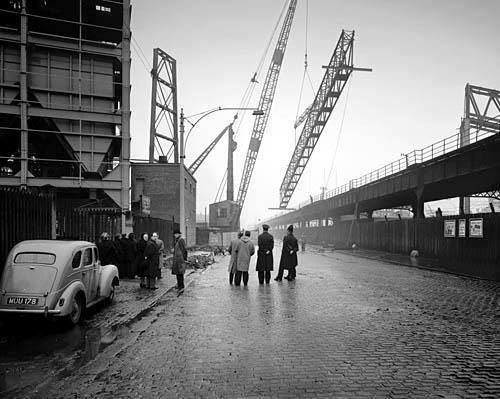 Riverside Station at the Pier head. 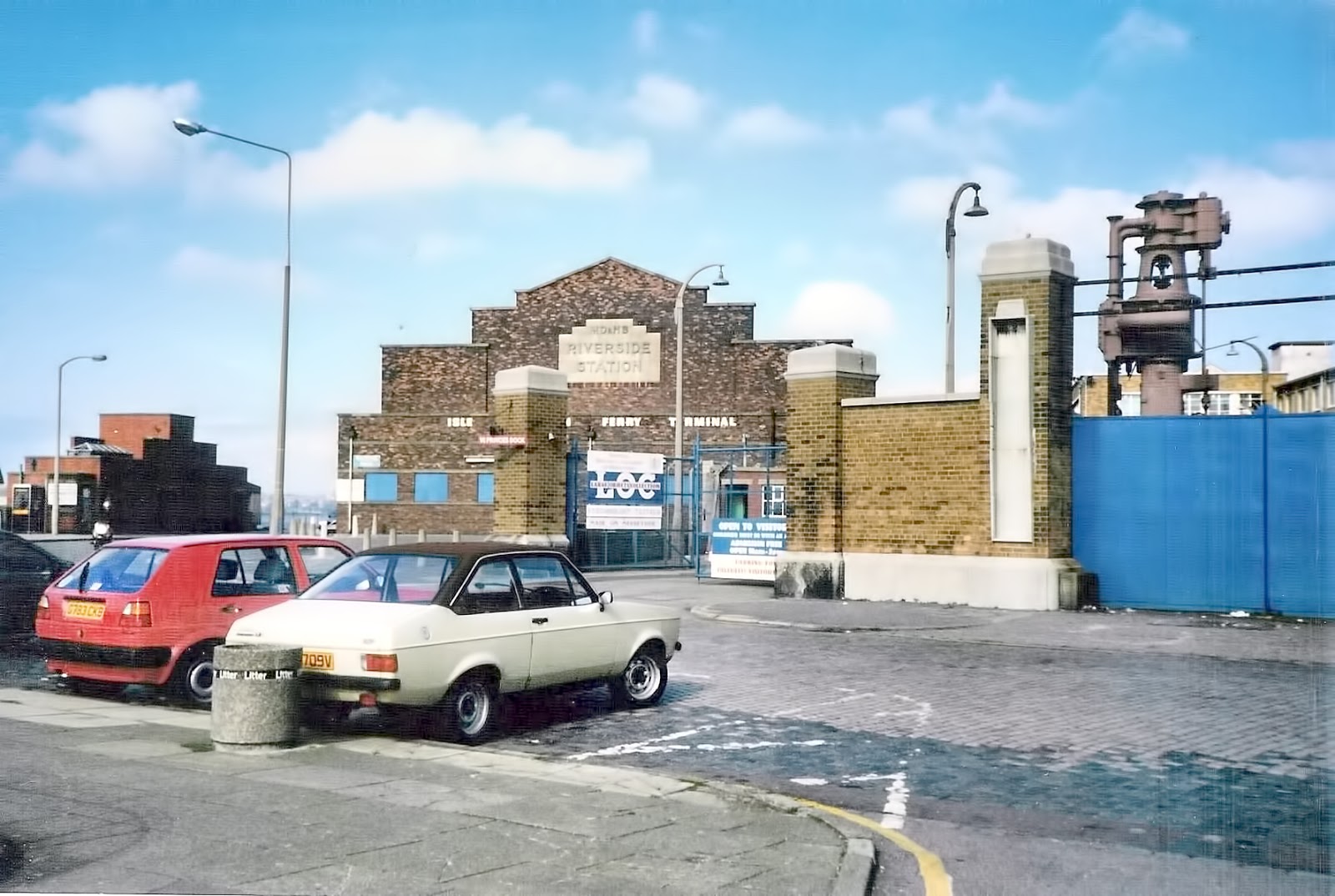 The Overhead Railway in the course of construction. 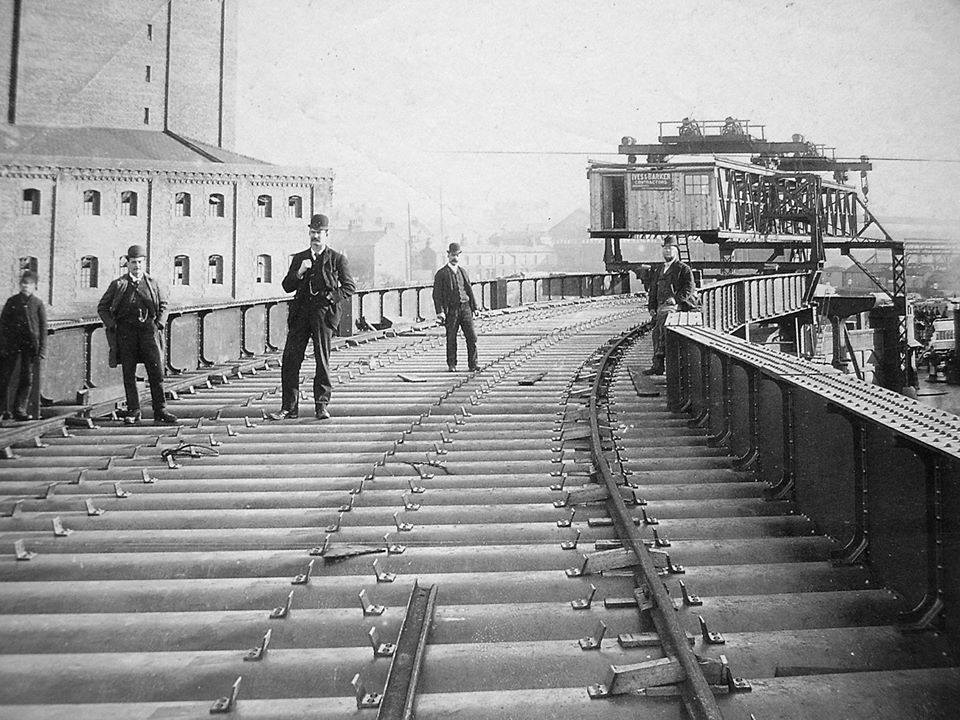 Traders move from the top of Castle Street to Exchange Flags 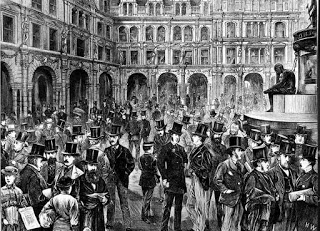 "Monday the 7th March, of that year, was a day of much importance in the commercial annals of Liverpool, as on that day the merchants abandoned their usual place of meeting, at the upper end of Castle St, and assembled for the first time in the grand area of the New Exchange.

No place in the world affords so elegant and commodious a situation like this for the purposes of a public exchange, and we have often been surprised to hear it observed that it would be difficult to bring the merchants to abandon their old situation to which they were so much attached by the strong ties of habit and early prepossession. In opposition to this common opinion, we are happy to observe that the transference was absolutely perfect the first day, not a single person being found loitering about his old haunts during the whole 'Change hours." No doubt to the relief of local shopkeepers around the Castle Steet area, under whose awnings the brokers would do business when it rained. In January 1809 the Commercial Room was opened in the New Exchange. This was afterwards renamed the News Room.

Thanks for sharing your memories, Davey.

We did the same with some bad results, I ended up with a broken arm the good thing about it was, we only had to walk up to Bootle hospital only 2 minutes away. 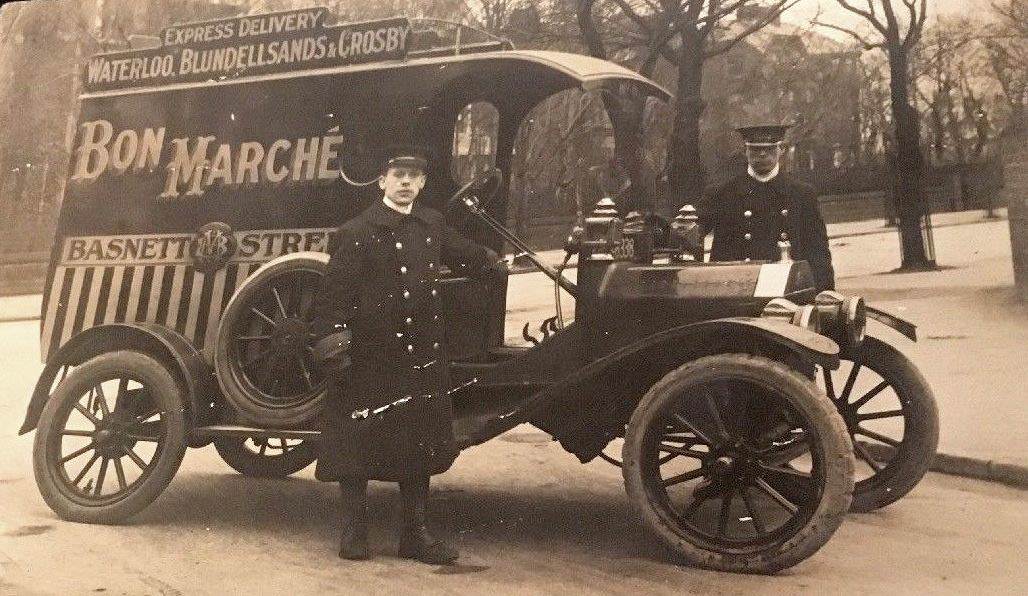