The pub by that bus stop was the Derby Hotel ('ornies as it was known).
The Shakey was at the top of our street (Romeo) - the one you'd walk down to the railway bridge.
Those steep stairs - we used the handrail down the centre as a slide - what health and safety?

Here's a couple of Hotspur Street - hope they inspire memories... 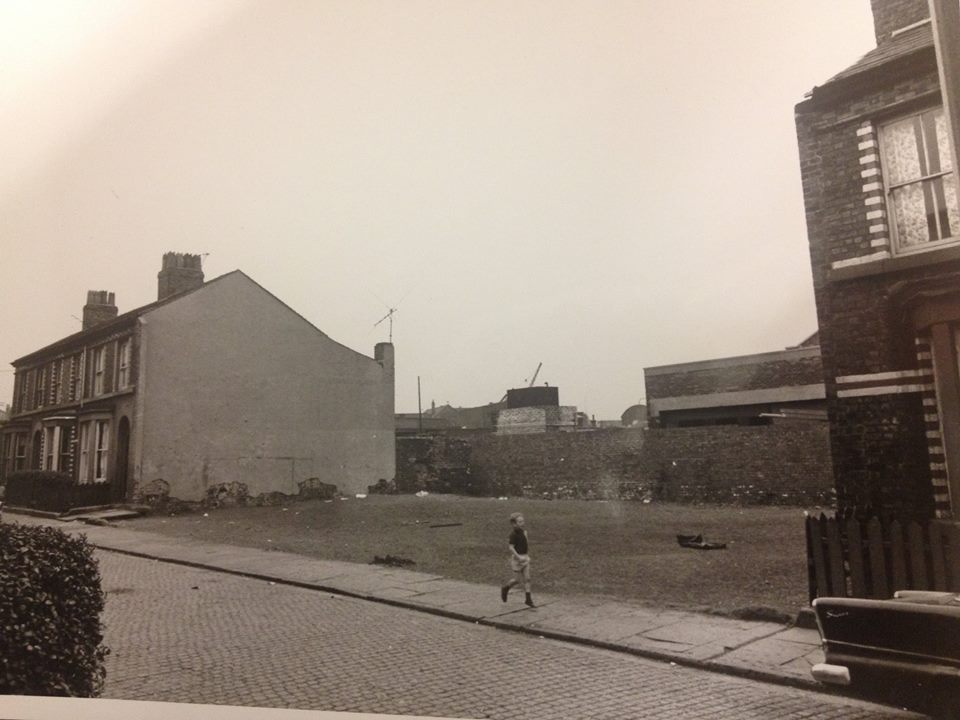 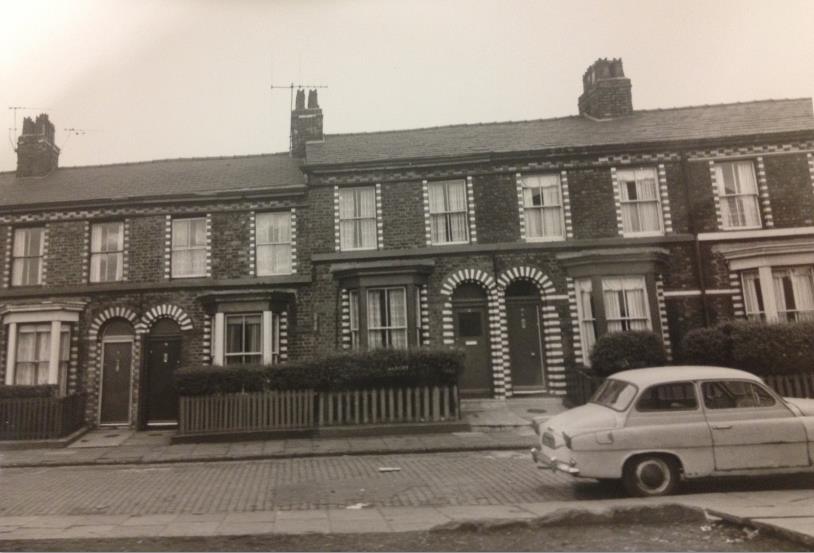 Here's that bridge these days 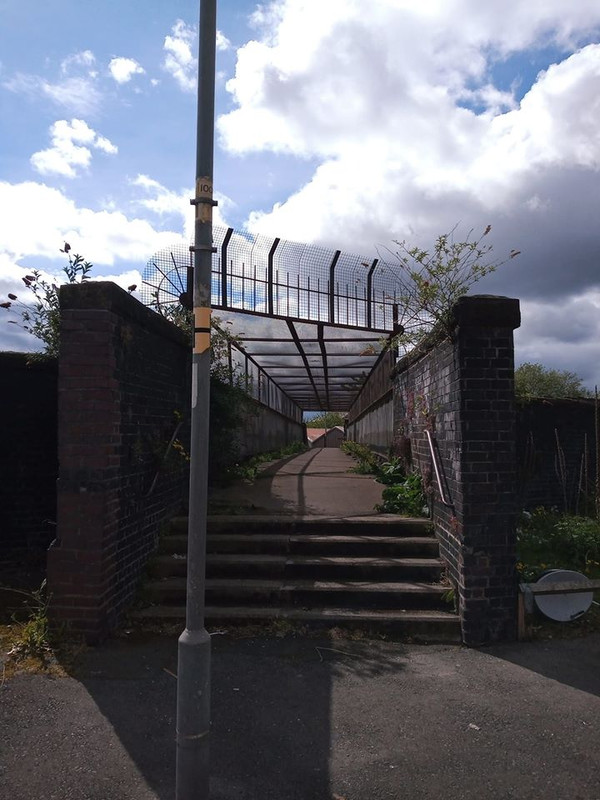 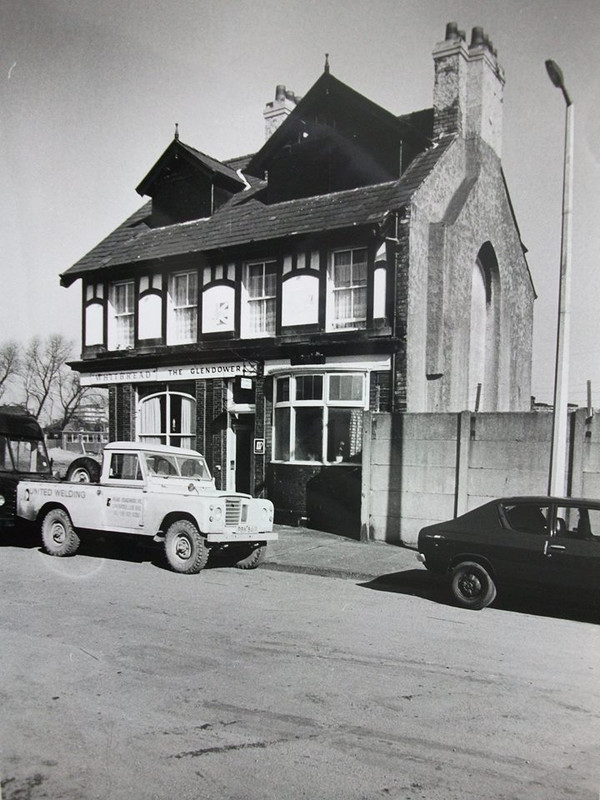 I'd forgotten about The Derby Hotel.

Those steps seemed a lot steeper when I was little. I think they were stone with some kind of metal edge.

I used to grip those handrails for dear life.

By the time we'd get to The Glen, all the men would be outside playing pitch and toss in St John's Road. It was before betting shops.

My cousins (the Webster's) lived opposite the debris/ralla. If we were lucky there'd be a flatbed parked on there.

We'd play climbing on and jumping off it. It was before Playstations.

Loved those houses. And to top it all, they had steam trains running past the bottom of the street.
Top

The steep steps are at the other end Dan

Saw your post and was going to reply, but the Man City - Leicester game started.

I copied the post to Alanna who laughed. In 5 minutes she had shared it with Donna and Dominica.

Within 2 minutes they had replied saying they remembered you, and both, separately, recalled an outing to Thornton

when your brother Alan fell into a ditch. Why are accidents so easy to remember?

Photo below taken in Hotspur Street 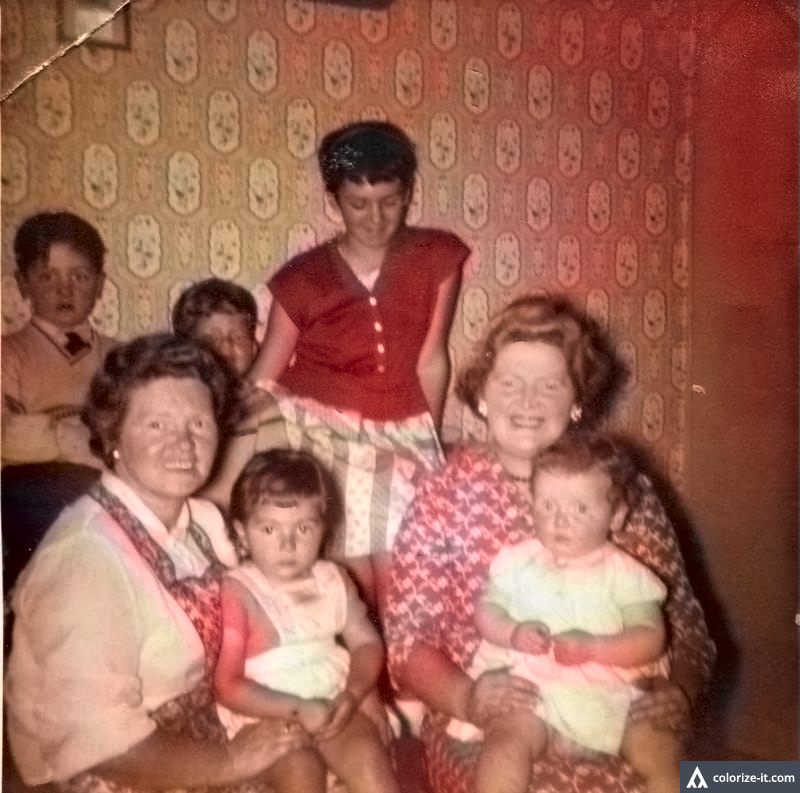 We asked both Donna and Domin if they could identify the child on their mother's knee but no luck.

Our aunty who lived further up the street was Mary. The Websters called her Mint. We called her Marn. Families!

She was married to Ike Hopkins. We always called him Uncle Ike, but now I realise that wouldn't have been his proper name.
Top

Hi Dan, thank you for your reply, hope your team won? The photo is great, it's lovely to see faces from the past, seeing the photos of Hotspur street triggered many happy memories. I lost touch with so many nice people when we moved, I've often wondered how they all got on over the years. Unfortunately I don't know who the child on Mrs Webster's knee is either. She was probably doing a good turn looking after a neighbour's child, she was such a kind hearted lady. Donna and Dominica will be amused to know Big brother Alan is still falling down ditches to this day !!!! Ha ha. Once again thanks for the update. Keep up the good work Linda.
Top

Linda, you mentioned going to St Alex in your first post.

It's one of the topics I keep an eye out for because my mum and dad, and their brothers and sisters, all went to St Alex.

They lived in Brasenose Road.

Below is from Bootle Times August 2 1957. The opening of the rebuilt St Alexander's Church. 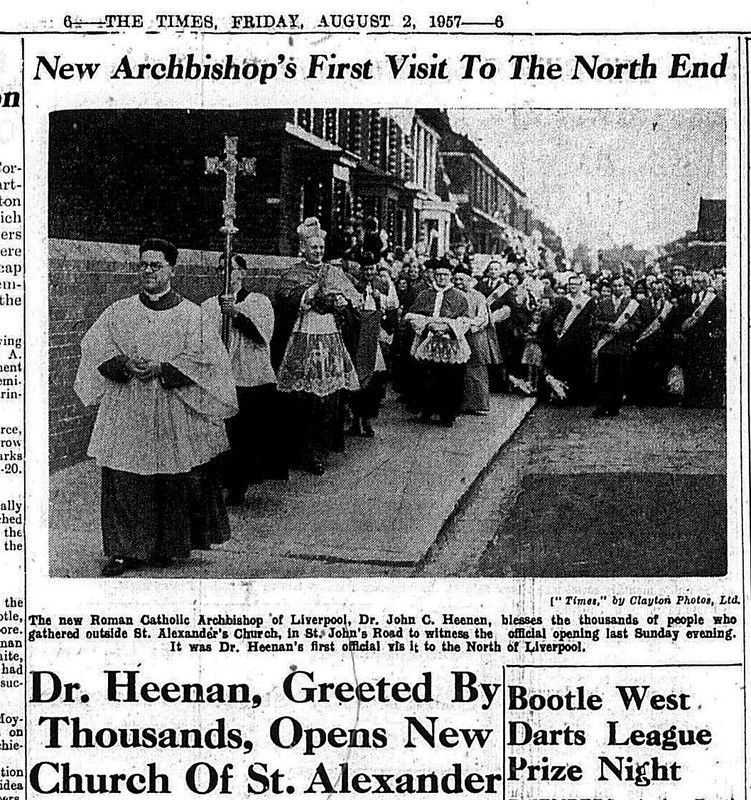 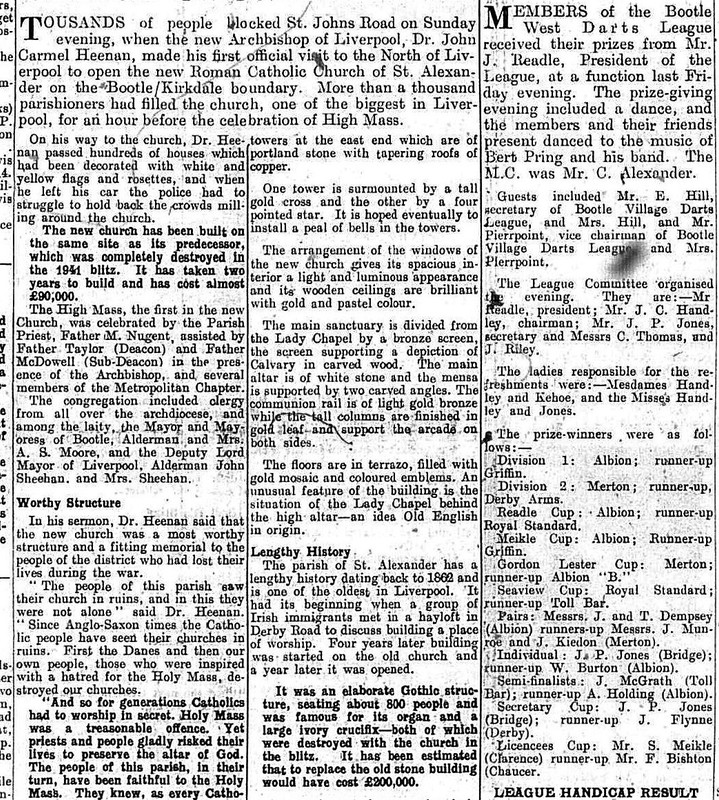 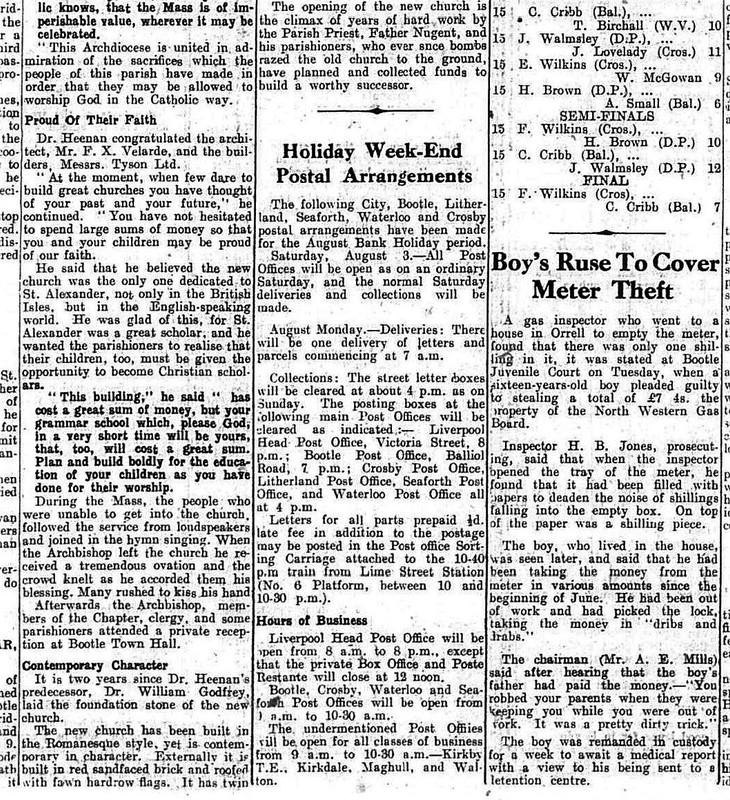 The darts news is for free.
Top

Great photo Dan, I may have been in the crowd with my mum but would have been a toddler then so too young to remember. The article is interesting and evokes special memories of St. Alexander's church, it was very light and bright inside on sunny days, unlike other churches which always felt quite gloomy to me as a little girl. I remember Fathers Nugent and Grealley when I attended infants and junior school at St Alex and later on Father Ryan and his lovely Airedale Terrier. Back then priests would visit the parishioners on a Friday evening and our mum would make us turn off the t.v. just as Popeye or another favourite programme was about to start which didn't go down too well with me or my younger brother, however the priest wouldn't know that as we sat there all smiles and looking like butter wouldn't melt...
When I was at school the headmaster was Mr McDonald, the teachers I particularly recall were Miss Carey, Miss Condron, Mr Hughes, Miss Roberts, Miss Breen and Mrs Waldron, I'm sure there were others but I can't bring them to mind right now. I was there from about 1959 until I left to go to senior school. Happy days (mostly!!).
Top

Hopefully these will bring back some memories.

I also went to St. Alex, but a little after you (born 1959).
I was an altar boy when Father Ryan was the priest.
I think Miss Condron became Mrs Green by the time I was there.
Miss Breen and Miss Loughran were the heads of Juniors and Infants respectively.
Think Mrs Waldron was the teacher of 'the baby class' when I started.

In this one you can see the photographer taking the pic that was in Dan's newspaper clip above. 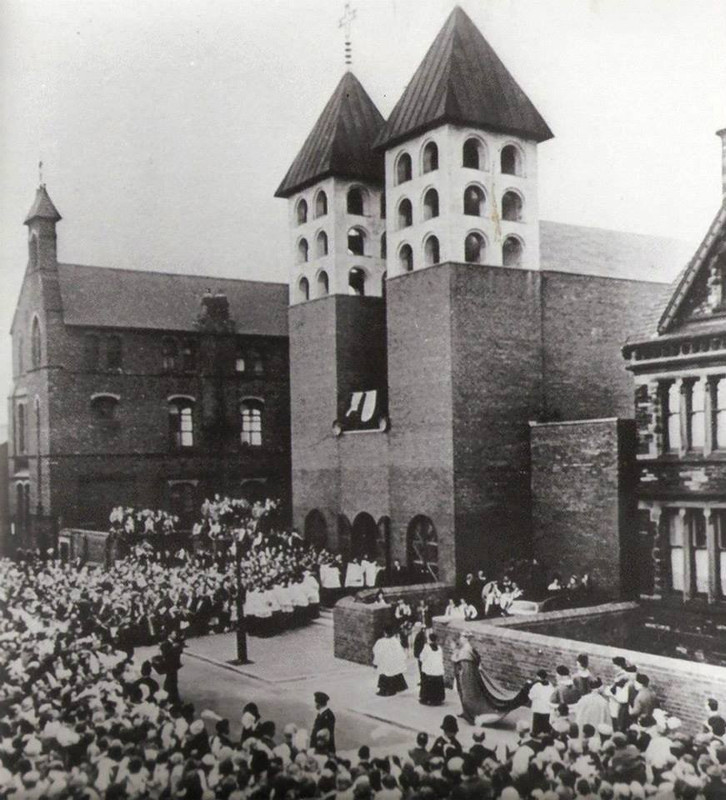 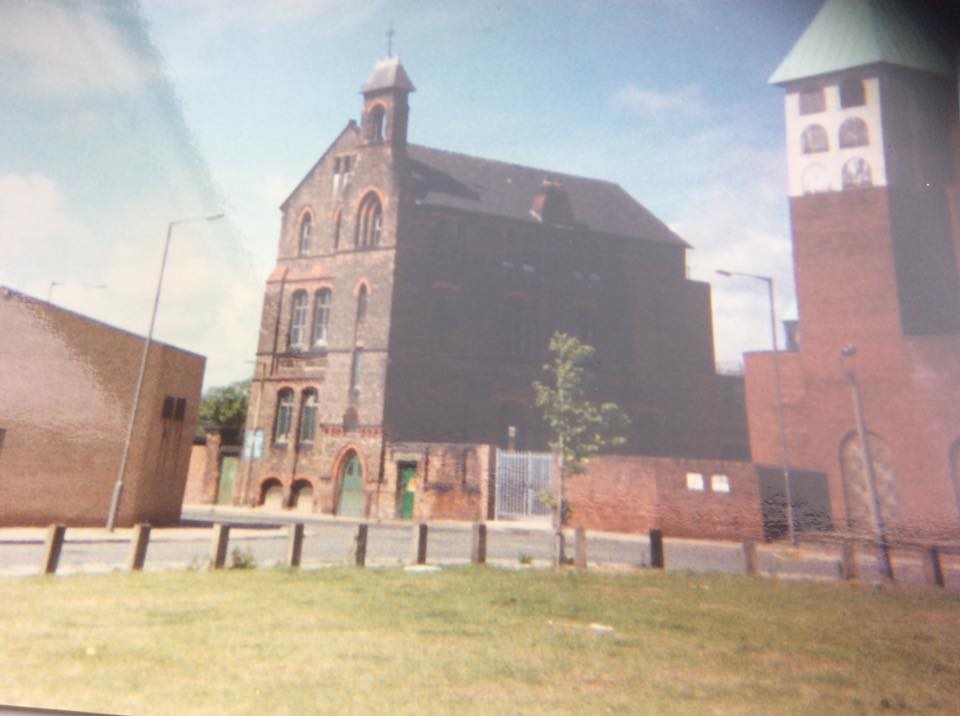 Hi Bernie, great photos to stir the memory thank you. Unbelievable number of people who came to the event and all those people sitting on the school wall to get a good view.
Your earlier post about sliding down the Glendower St. bridge made me smile, the kids loved that game much to the annoyance of the women with shopping bags who actually wanted/needed to use the rail for the purpose it was actually intended. As you rightly say no thought what so ever to health and safety!!
Top

Just joined the group and fascinated to read this post and threads. I lived at 11 Wolsey Street which was one of the prefabs at the top next to the Pitch Pine pub. Replying to "fazerman", the street at the bottom of Wolsey Street was Sanderson's run by old Mrs Sanderson.
Does anyone have any photos of these prefabs?
First memories are of the Coronation and of Dr West who lived in the prefab opposite.
Eddie Francis
Top

Picture of my cousin Dominica Webster and sister Alanna in Hotspur Street, taken about 1966. 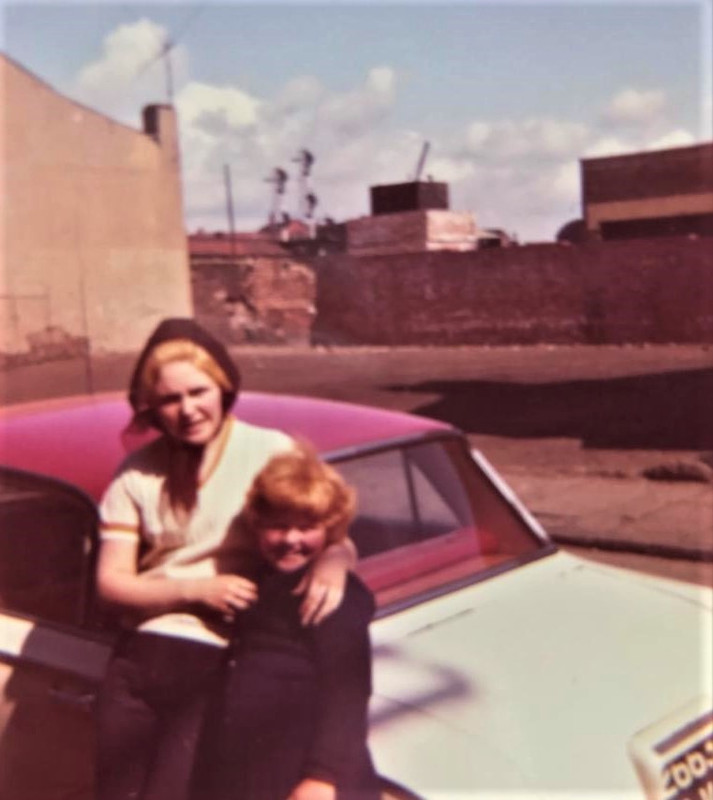 I think the building in the background is the rear of the Engineering Works on Bankhall.

In the background left are the signals on the Liverpool Southport rail line, which ran past the bottom of the street.
Top

Right about that building Dan. The British Rope Works or, as we called it ' the wirey'.

Dan
Love the photo of Dominica and Alanna, just as I remember both.
Hope they are all keeping well.
Thanks for the memories

Found this photo on the Historic Liverpool site.

It was highlighting Paton Street, but i noticed it also showed the top of Hotspur Street.

Tried labelling some details on a copy. The picture was taken pre - 1939. 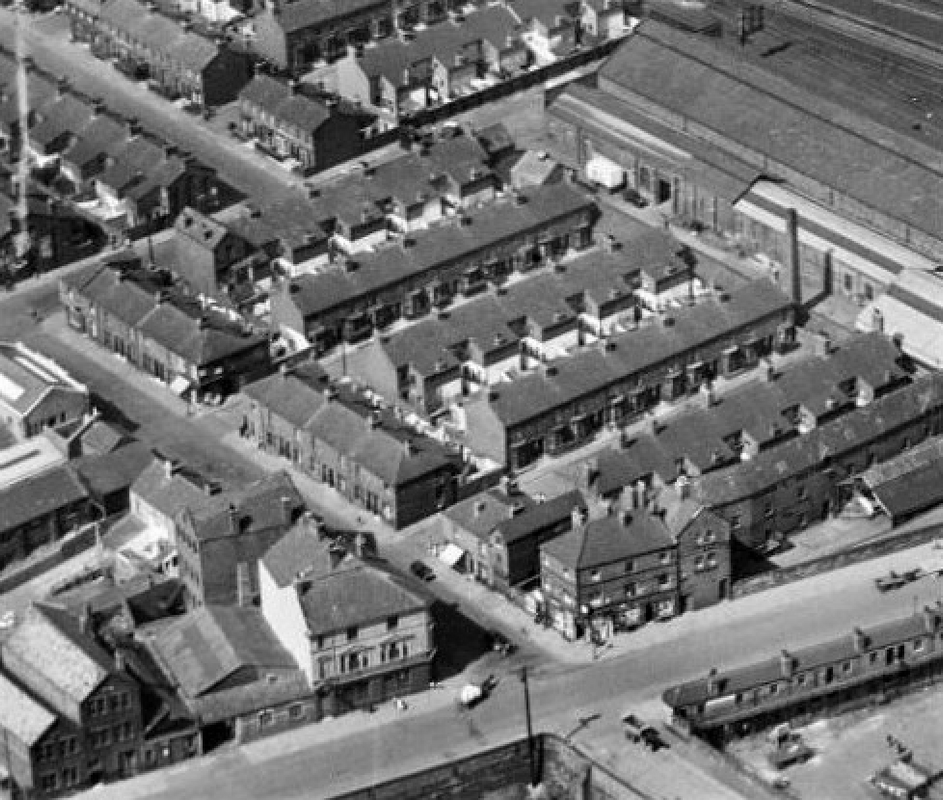 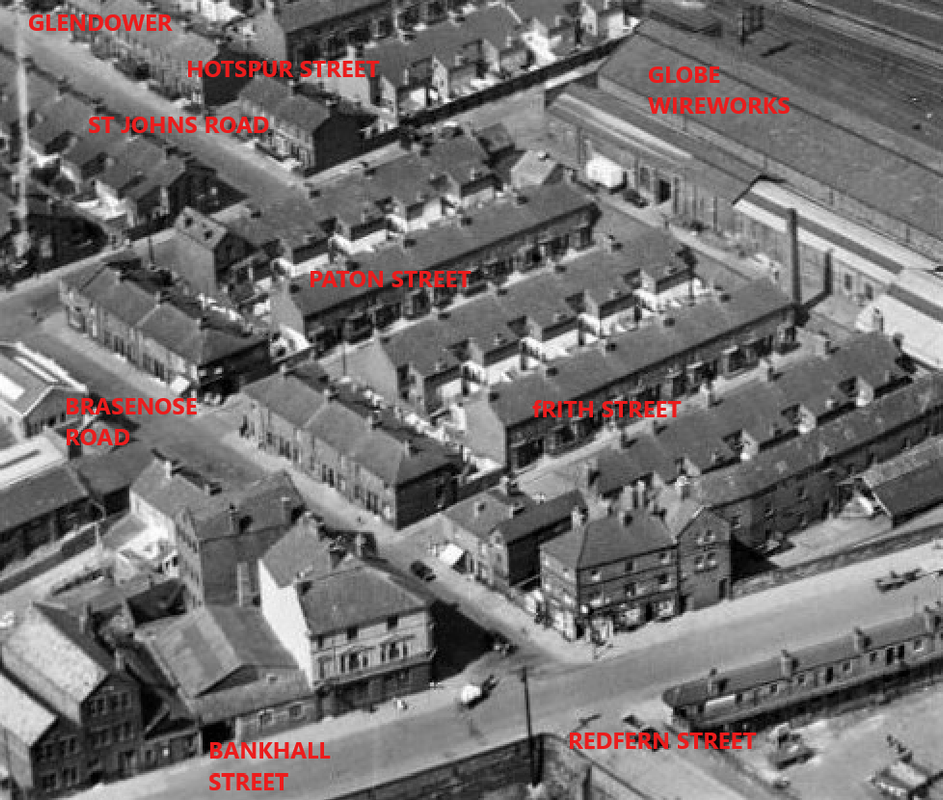 Those 3 garages you can see (centre, right) - the right hand one was my Dad's.
Left one was Mr. Williams who had Connie's shop on Stanley Road. 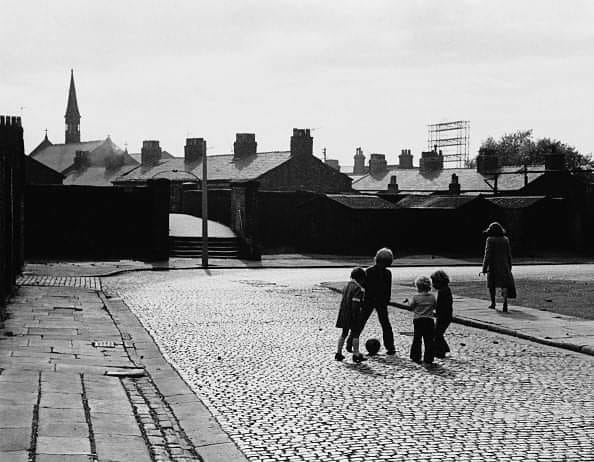 Hardly changed at all.

I lived in Othello St and went to St Alex 1958-65. The names of all the teachers brings back many memories. Mrs Reynolds taught the final year in 1963/4 then Mr Rodwell 1964/5. Miss Breen replaced Mr McDonald as Head of the juniors in 1964.
My gran Mrs Reardon lived in the last house on St Johns before the gates to the Rope Works until 1968 when she left to live with us when we moved to Knotty Ash. Her neighbours in St Johns Road were the called Kelly, Douse, Long and Donaghue. I also remember school friends Andrew Dillon from Hotspur St and Kevin McNally from St John’s Road, opposite the Glendower pub.
Top
Post Reply
52 posts