can someone help?i have a THOMAS DELAMERE [farmer] who married CHARLOTTE MUCH, at st anne richmond in liverpool 24/12/1822
both lived in the liverpool parish.

my g,g grandfather john delamere was born 1806, but cannot find any proof
of his birth [he could have been born over the blanket ] i do have his marriage and death dates.

i am left wondering, could they be related

I think it is possible that your Sarah married James Ainsworth as I have found them in 1841 census at Derby Cottage, Walton on the Hill. Checked for the other possible spouse names but nothing that seemed to match.

Couldn't find their marriage on Lancs BMD which may have given a church. If you think they may be related you need to get the marriage certificate. Do you think that the family always lived in Lancashire?

The problem in linking people lies in the lack of paperwork trail prior to civil registrations. If you have the marriage details of your Gt GT Grandfather it should list his father but not always, might be best to list exactly what you have including dates etc witnesses and so forth.
Lily
Top

I think it is possible that your Sarah married James Ainsworth as I have found them in 1841 census at Derby Cottage, Walton on the Hill. Checked for the other possible spouse names but nothing that seemed to match.

Couldn't find their marriage on Lancs BMD which may have given a church. If you think they may be related you need to get the marriage certificate. Do you think that the family always lived in Lancashire?

hi EILEEN, "thank you" for your help. i have not looked at them as yet,
i am just trying to make connections. johnwas supposed to have been born 1806, sarah 1816, and i have another daniel born 1818.
now daniel was born in upton. he was a shopkeeper, and farmer.
but in anglesy. funny enough one of his sons ended up in great crosby, were all my family originate from, he lived a few doors away from one relly. [i take it that he was a relly also.] but i need john, daniel and sarahs parents name to confirm it.

lily8 wrote:The problem in linking people lies in the lack of paperwork trail prior to civil registrations. If you have the marriage details of your Gt GT Grandfather it should list his father but not always, might be best to list exactly what you have including dates etc witnesses and so forth.

hi LILY8 my gt, gt gt grandfathers details.
he married MARY CADDICK in st nicholas church liverpool 23rd january 1837
witnesses=margaret caddick, and edward lovatt.
liverpool butcher, she was a spinster.
his death cert shows he died 7th january 1858 aged 52yrs village, great crosby. informant =richard caddick
no parents names mentioned.
on his wedding he was spelt JOHN DELLAMERE
a similiar thing happened to his son, at st peter and paul, in crosby.
but he had it changed

the one i surmise? could be his brother is DANIEL DELAMERE
born 1818 [in upton cheshire ] he first married in liverpool then lived in anglesy. he was a provision dealer, plus farmer. one of is sons, a butcher also
came to live in great crosby.

i also queried about thomas delamere marriage. his details

1841 census for John and mary mistranscribed as May: living in close proximty to the Caddick families in Gt Crosby.


One to ponder on for a parent to John, who names a son William?
1841 census ages rounded down by 5 or so years.

The only problem with the 1841 John & May Dellamere is that their son John appears to have been born c1828 and daughter Catherine in 1833 and John and Mary only married in 1837. Not unknown I know but as we know ages were also put down incorrectly so much.

May need to look for christenings of the children to confirm if they are the correct family. If they were RC I might be able to check St. Peter & Pauls.

Perhaps our poster can give us details that he has of the first census he has his family in? then we can all attack it from the same angle??? there are a few possible Johns but the ages vary by 10 to 12 years

EILEEN, LILY,"sorry" for the late reply. i was cleaning out computer.
in answer to your queries, i have the following

Hi Eileen sorry mate, I made a typo on the census it was 1851 and tallies with our posters 1851 records. Looking at it again I would make the following assumptions the 1841 has our man as born in the county (Lancs) and the 1851 as born in Liverpool so born Liverpool Lancs. The Caddick side is easy to trace but that is not wanted, the wedding cert only confirms the Caddick line with the witnesses. So we are left with the 1861 census where Mary is a 49 year old widow living with her mum and sister Alice, but where are her younger children?? Catherine would have been 18 Married? William would have been 12 and Thomas 10 and a half. Have searched 1861 for the three but no sightings, did the 2 younger boys die? will keep chipping away! Here is everything from IGI under anything like Delemere.
http://www.familysearch.org/Eng/Search/ ... e=DeleMere
Lily
Top

i think that should help you both, hopefully
frank
Top

i expect that my query is dead now???
"thank you" for your help though
frank
Top

Still looking it's is not an easy one!
Lily
Top

LILY, don!t take me up wrong, i am fully aware it!s a hard one.
that was my reason in asking for help. sorry if you felt offended

Not offended at all ,some just take a long time to work out.
Lily
Top

further census 1861 Thomas Delleman b 1850 I assume this to be Thomas Delemere residing in the village Gt Crosby with the Caddick family of Joseph head, his wife Margaret and their son Peter listed as nephew can you confirm that we now have all the living Delemeres placed correctly in 1861?
Lily
Top

LILY, 1861 CENSUS THOMAS DELLEMAN CANNOT BE MINE. NOR COULD HE BE RESIDING WITH THE CADDICK FAMILY. THE REASON BEING THAT
JOSEPH CADDICK WAS DEAD

You might want to e-visit that one for Thomas DELLEMEN I think, here is a transcript of it: It did take some time to find it and I was hoping to find the boys somewhere with a Delemere relative. Can you please have another look at your records as I am fairly sure this is Thomas Delemere, of course as with all things I could be quite wrong. However logic would say it's a fit.

Condition as to marriage: View image

LILY,i shall try and check it out tomorrow, "thank you"

Looking through the IGI records they have the marriage listed as DELLAMORE have you actually seen the microfilm record? as there are a few Dellamore/Delamore marriages recorded also at St Nicholas within a 5 year period who may possibly be siblings to John who married 23/1/1837. Ancestry also has John listed as Dellaman in 1841 census though to me it looks like Dellamore/Dellamere. As you know transcriptions can be mistaken and often based on what the enumerator "Heard". It is probably worth pursuing the Dellamore/Delamore name more fully. Will get back to you.
Lily
Top

LILY, it certainly seems like thomas dellemen [wrong spelling] was one of mine. the caddicks would be his relatives.

regarding the delamores/ delamares/delemers/ i have been in contact with numerous people of these names, over the years. also, some contacted me about the similarity, but unfortunately there is no connection.

my reason for wanting this, is i have the whole family history from the start of the family name in 960 when ROLLO THE DANE married princess GRISELDA the daughter of KING SIMPLE of france. being a great seaman, on their marriage he took the name of DELAMERE [OF THE SEA]
i have all the marriages and connections right up to 1854 for ireland.
through this, i have connected four families to their full family tree
because i do not have my g,g,g,grandfathers birth cert or baptism
i cannot make the connection to either the english or irish side.
there are one or two from cheshire, who look likely, but they are not positive.
i really do appreciate the help which you have been offering to me.
i also have my grandmothers family tree back to the 1500s

I will keep on quietly ferreting for the missing link.
Lily
Top

Like Lily, I have found difficulty in finding anything other than what Lily has found. I think that maybe you will have to consider that you have found the Brick Wall that we can all encounter when trying to research our family history.

Sorry I can't be of more help Frank.

LILY, EILEEN, "THANK YOU" both, for your efforts.i have tried for ten years,
so could hardly expect you both, to find it in a week.your help was, and is
appreciated.

Fao Frank. (11 years later).
I have found John and Sarah Delamere - well, their gravestone in Overchurch woods near Upton, Wirral ( where there used to be a church). The gravestone is partly legible ( am going to go back with soap, water and a scourer. I have photos taken today.
The gravestone next to John and Sarah is Ann Delamere, daughter of Dan and Marey or Marcy.
Here’s a doc about the church (Overchurch) and surrounding history. https://s3.eu-west-2.amazonaws.com/shee ... page47.pdf
The church was demolished in 1887 - perhaps the burial records went to St Mary’s in Upton? 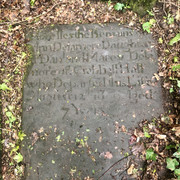 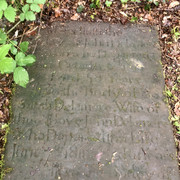 Hello Chris, sorry but Frank and his wife Maura passed away in 2013

Thanks for letting me know, Sheelagh. Sorry to hear.
Top

Please don't scour old grave stones. It might well damage them further. Do a rubbing or cover with tin foil and push it into the letters with a scrubbing brush and then sprinkle on flour. Messy to clean up though , unless you parcel it up with the foil and through in the bin or take home
Lynne
Top
Post Reply
30 posts • Page 1 of 1