Picture of the day - bernie johno

Join in here with our very own Bootle Chatterbox...
Post Reply
7252 posts 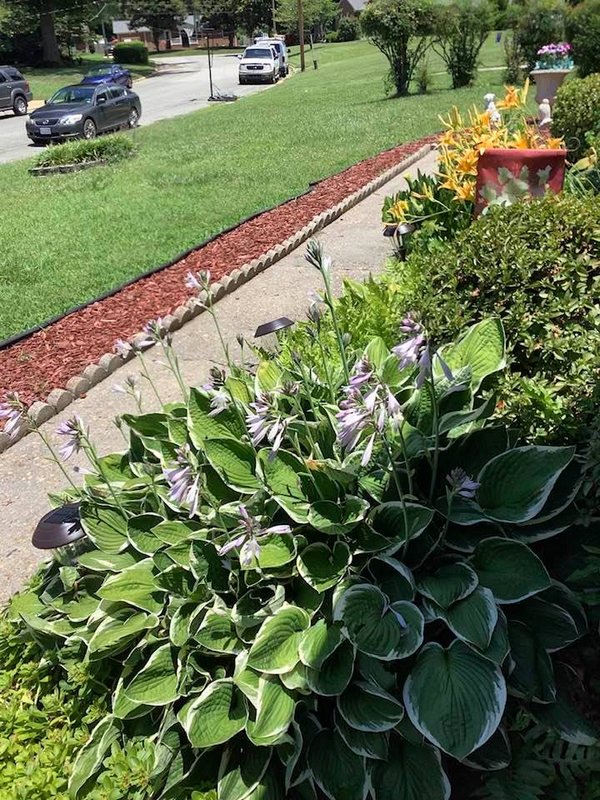 We've just bought a couple of Hostas, they're only small at the moment.
Top

My Granddaughter, Meghan and her boyfriend, Ryan, came to spend the weekend with me - it was lovely meeting Ryan and we had some nice chats together. He is originally from New Jersey. Friday they went to "Water Country" and had a Blast!! Saturday - they went to Virginia Beach and on their return stated they had never seen so many people at the Beach in their entire lives. That evening we met up with Janine & Mark and enjoyed a lovely meal to end their visit. It was such a treat seeing them both!

Pinched from FB. Not my photo, courtesy of Droner Alert.

Anyway, seize the moment as they say... 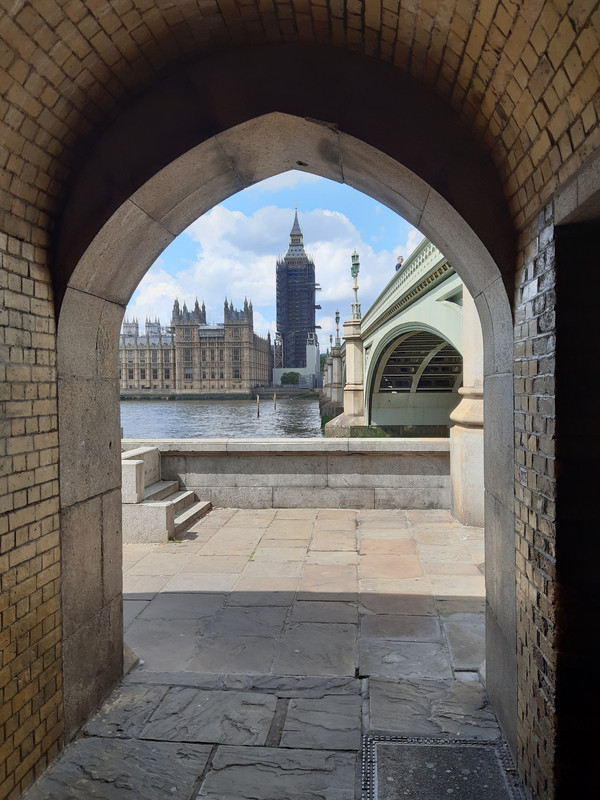 This pic which has surfaced online made me chuckle after seeing Boris Johnson has opened his gob again.

Boris Johnson has been urged to apologise for "offensive" comments about Margaret Thatcher helping the environment by closing coal mines.

The PM said the closures gave the UK "a big early start" in the fight against climate change. 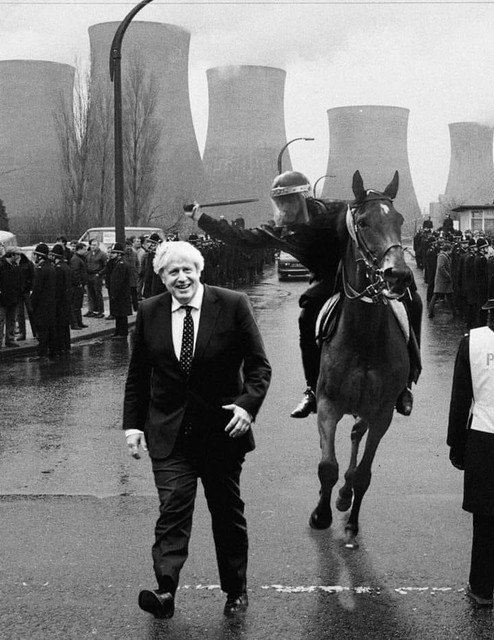 I'm with you Mack, every time he opens his mouth he spews out an offensive or ill researched statement. He clearly couldn't care less about the plight of the working class people in this country. I normally avoid commenting on politics because I believe everyone's entitled to their own opinion, but in the case of Johnson, and what he stands for, I'll make an exception. That picture speaks volumes.
Top

The world has gone mad.

Cannot believe what is happening in Afghanistan at the moment.

Terrifying for everyone living there with this happening. This may appear slightly inappropriate considering the circumstances, however consider this lot forming a band... 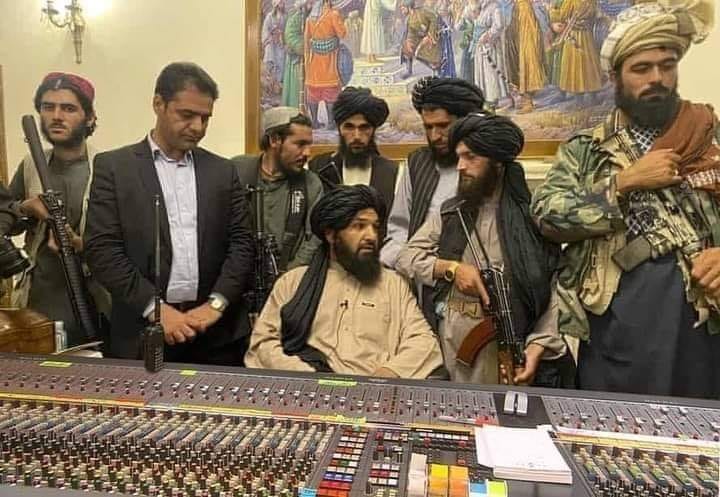 Mack, It surely is devastating as to what is happening in Afghanistan but I wonder where the women are when I see photos of
mainly men at the airport!!!!! Also, I fear all the weapons that America provided to the soldiers in Afghanistan are now in the hands
of the Taliban!! Where is the element of "Fighting for your own Country" gone?

On a lighter note. Just returned from a happy, chatty, lunch with my "Brit Group" (first get together in a restaurant since last March,2020) It was
such a joy to see them again and of course catch up on each other!! We have already set a time and place for September to continue the familiar tradition!!

Love to see pics of you Brit Brides; wonderful how you've all stayed in touch and all looking great.

Elaine How good to see you joining in again... btw PM I've sent you hasn't cleared, is your inbox a bit full at the mo?
Bee

Thanks Bee and Elaine for your kind comments. This small group is a "Spin Off" from the TBPA that closed a couple of years ago
and many of the members of the various Branches around the States decided to form their own little Clubs as we
hated to lose touch of each other after so many years.

Elaine, It certainly is lovely to see you posting once again - so very nice to have you back "On Board!"! xx
Top

As to your first paragraph, Patricia, they were my thoughts for a while. However, i have since found out, the Afghans have lost 700000-100000 personnel over the past twenty years.

I don't want to besmirch the post, as its great to see all you ladies together, but let's spare a thought for all of the Afghan families who have brothers, sisters, sons and daughters over the years. Their courage cannot be brought into question.
Top

Phil, I certainly do not want to "besmirch" (nice choice, I love it) your post

however, in my opinion it is a hopeless situation that could go on ad infinitum. The Russians tried and failed and it appears that the best thing is what is now being accomplished and leave the country to whatever becomes of it!! Over 3,000 American troops have lost their lives for WHAT!! leaving behind grieving families without even the benefit of a timely resolution to the whole matter and no end in sight!
Top

Cannot believe what is happening in Afghanistan at the moment.

Terrifying for everyone living there with this happening. This may appear slightly inappropriate considering the circumstances, however consider this lot forming a band...

No doubt the majority on here will score the full 15 like I did and I'm only 54 years young. 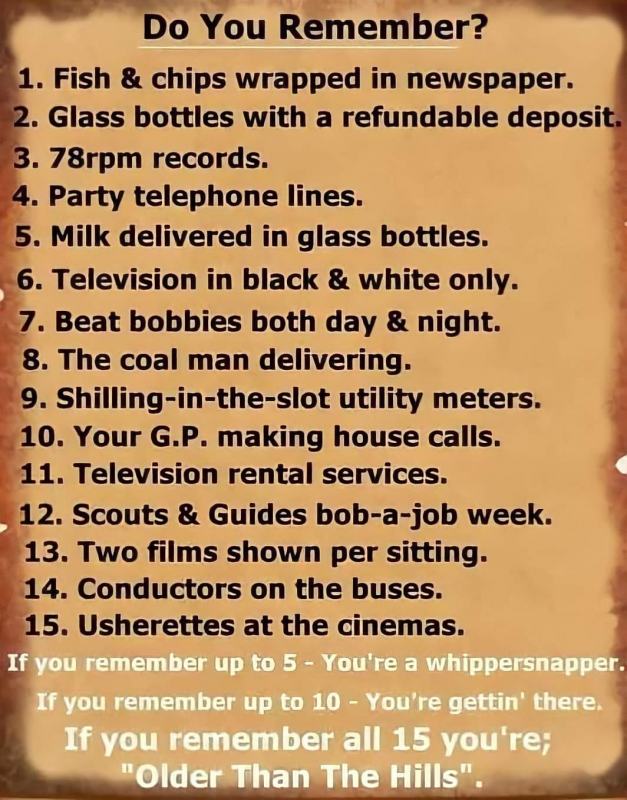 Yesterday I returned from my Wednesday Line Dancing class having attended same with mixed feelings both happy & sad as our Teacher, Joy, is moving to Florida to be near her Daughter & Grandchildren and this was her last Class. I have been attending her classes for over six years ago and made numerous friends along the way. She is an excellent teacher and would recommend her anytime. This evening, we are giving her a send-off dinner with about 23 members attending. Here is her Wednesday morning class (w/a few missing) but she also has two classes on Monday, two on Tuesday & Wednesday both morning & night. all different levels. How she remembers all the dance steps is quite beyond me. 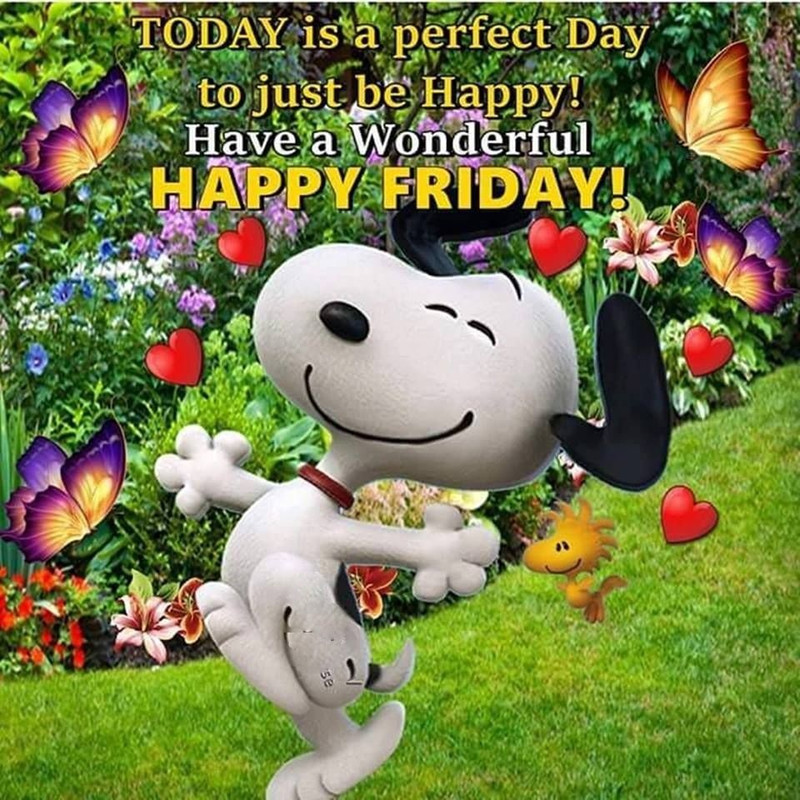 Sunny, warm and beautiful day! Obviously you are having a happy day too Patricia!

Hope you enjoy your day Patricia

Many thanks for your lovely comments, Lorretta & Elaine!! xx

Beautiful girls Patricia, can hardly believe how quick they have grown up!

I know you are very proud of them!

Battle of Britain Day 2020 celebrations: 80th anniversary events taking place today!
Thought this was a truly lovely photo to show on this particular Day!!
A Typhoon above the White Cliffs of Dover!
(Will never forget the beautiful sight of the "Cliffs" coming back from Germany to visit Family) 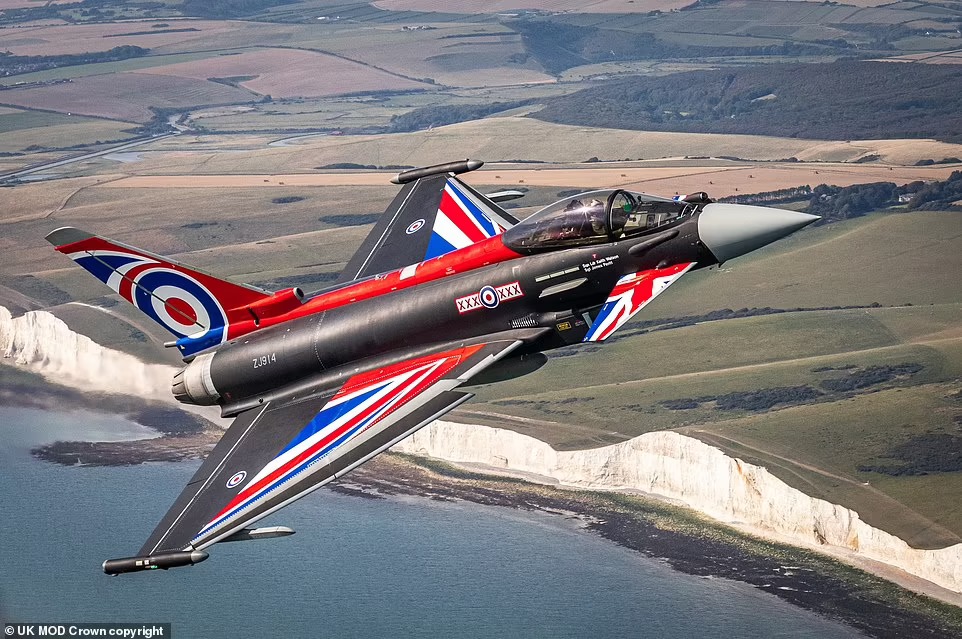 Taken by a friend who has a farm in Lydiate, from her farmhouse bedroom window this morning. 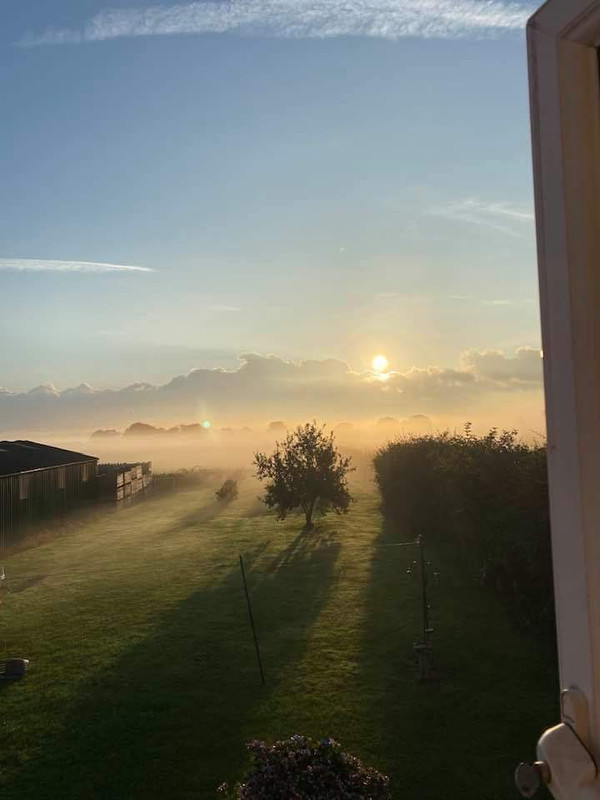 Thanks guys. It reminds me of the cover of a Genesis album. Bernie might know which one I mean.

Wind & Wuthering mate - a fine album it is too 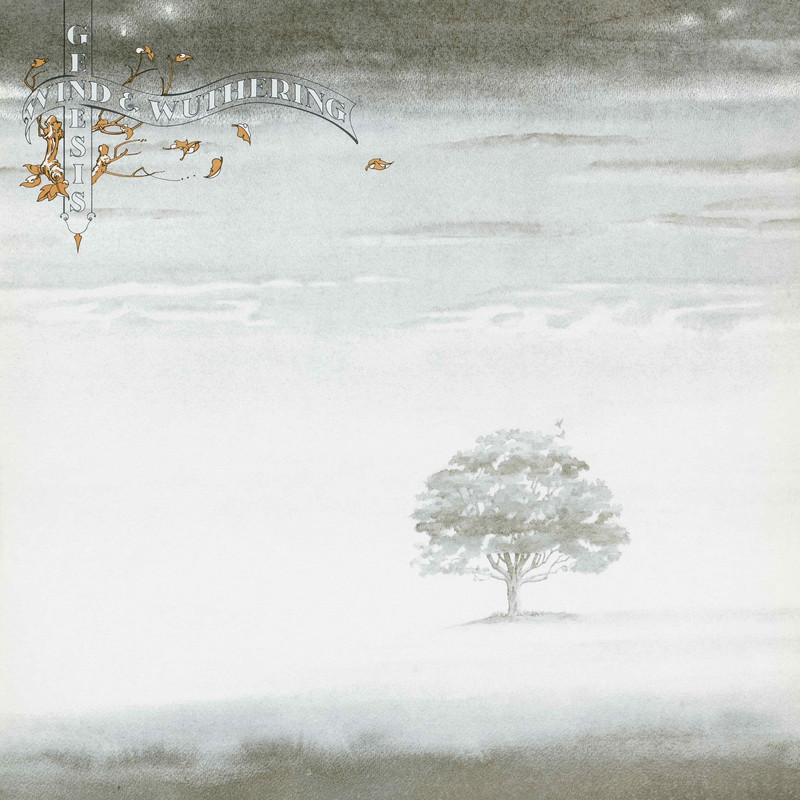 That's the one Bern, my first and favorite Genisis album.

Had a great night at The Phil last Saturday mate - Steve Hackett played the entire Seconds Out double live album; superb it was too.

There are loads of great acts performing at the Phil over the coming months, reasonable prices too. The standout one for me is Dionne Warwick.

We went to see Dial M for murder on Tuesday at the Playhouse. Wasn't impressed, as usual they have to add unnecessary sexual inferences. The guy was like an octopus all over Margot, just not needed.

In the second act, the inspector arrives and does a double take at Max, who was played by a black man, then he refused to shake his hand??? The best was, because an ex Strictly winner played the main character, he did little dances in it.

Why they think classics have to be messed around with, I don't know, Hitchcock must be turning in his grave watching it. I saw it in 1987 in Jersey, by their am dram society and it was far better.

Here is the Echo review.