Join in here with our very own Bootle Chatterbox...
Post Reply
3181 posts

Liverpool have absolutely no idea at the moment. Our ‘world class’ front three are playing dreadfully lately. Mane needs to be subbed for Jota. If Klopp doesn’t change something then I would not be surprised to see Chelsea get four.

Jota on for Firminio.
Top

So boring now switching off

Liverpool switched off long before you Bob

I am now starting to get worried about Klopp. How could he possibly look at that team on paper and think it was good enough?
A disgraceful performance

Absolutely no shame in getting beaten by Fulham at home, they have beaten bigger and better teams than Liverpool on their travels this season (Everton spring to mind. JJC.
Top

What a different performance against RB Leipzig!
The return of Fabinho was a gift as well as a turnaround in form for Phillips, Wijnaldum, Kabak and Allison.
Other players did occasional special things, such as Origi's amazing pass to assist Mane's goal and positive moments from Jota and Thiago.
The smile is back on my face!
YNWA
Philrob

Surely no coincidence that Fabinho's first game in midfield since the Goodison Derby is the same game as Thiago's best performance since that same game.

Unsure about the use of 'turnaround' as applied to Phillips, Phil - think the lad's done just fine whenever he's played; in fact, it was a source of frustration that JK didn't seem to trust him and kept playing Hendo at CB.

Jota is definitely welcomed back to the fold - very useful and a constant threat.

Total agreement with you Bernie
Top

Who would you like to see Liverpool sign? I don’t mean players who are out of their reach such as Naymar, Messi,Mbappe etc.
If I were a manager I would be going all out to try to sign Pedro Neto, he is only 20 and really talented and in my opinion is going to be a ‘superstar’
Let’s hear your ideas.

JK summed it up Bill - "a dirty 3 points"; a quality goal though (even though I originally though side netting

Good to hear the keeper was ok, sitting up and conscious.

Real Madrid with Chelski or Porto in the semi.

Could have been a lot worse.

Everybody seemed to get their mojo back with the addition of Jota!

TAA back to his best and a top performance by Fabinho and Tiago!

Roll on Real Madrid on Wednesday!

I’ve said it plenty of times, they should all go to Specsavers and be tested for colour blindness. In all my years of watching football, I have never seen a team that just pass the ball to the opposition as much as this present Liverpool team do. I don’t think that they do any passing drills in training.
That was an atrocious performance.
Bill
Top

Relieved to only be 2 down and have an away goal.
Can't see us keeping a clean sheet next week though.
Born and raised in Romeo Street, later Lambeth Walk, Jersey Close, Garden Place, Hawthorne Rd, Gonville Rd now Netherton
Top

Poor performance, some atrocious passing how much are they on???
Top

When we need goals I can’t believe he’s playing Firmino instead of Jota. I hope I’m wrong.

Could of, should of won 5-1 Disappointing.
Top

Translation of part of an article by Freddie Röckenhaus on the European Super League debacle, from the Süddeutsche Zeitung..

Headlined :Money from Saudi Arabia, a phone call from the Kremlin

Demos and parliamentary enquiries are all very well, but when Vladimir gets the hump you're looking at slightly more than a points deduction.

The problem with Super Leagues is that they can't guarantee attractive football.

Games between "The Big Six" haven't been much to write home about this season.

Two of the largest advertising revenue streams for Sky Sports come from Sky Bet and bet365.

Co-CEO, Denise Coates, was paid £ 421 million and, in addition, received a £95 million dividend.

Both her father and brother also each received a £95 million dividend.

Below is a graphic showing estimated revenue loss due to pandemic ground closures.

Total losses are shown beneath the club crest.

The financial burden of the lockdown hasn't been spread equally, comrades. 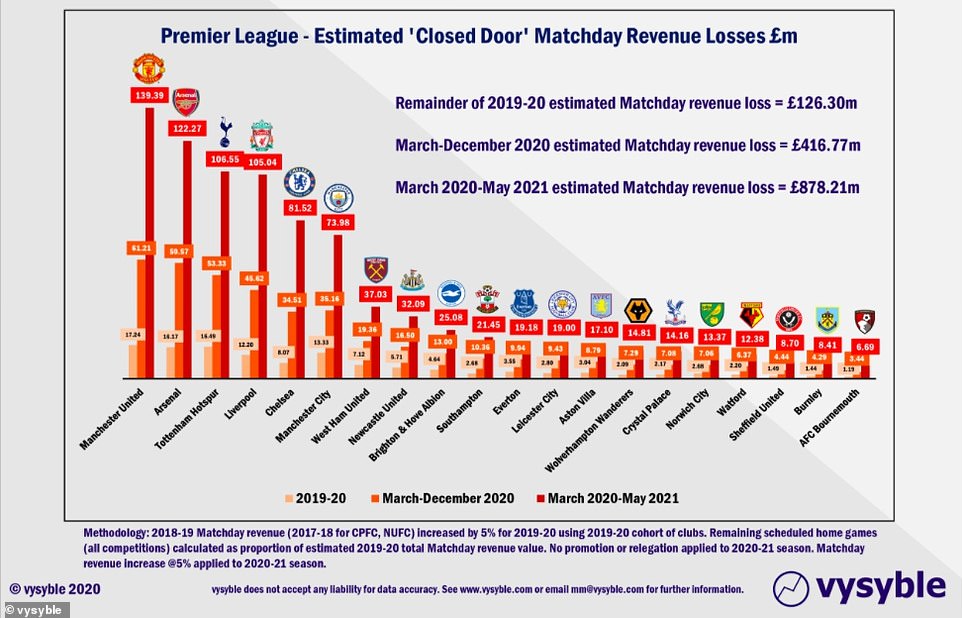 It looks like the EPL TV deal is going to be rolled over, to cover 2022/25, on the same terms as the current deal.

After the Big Six/Super League controversy I hope BT and Sky now implement their belief in fairness and equality.

They must ensure each club receives equal live match coverage throughout each season.

Amazon show each club twice. Their coverage is inherently fair.


BT and Sky will show 180 EPL games per season.

Each team should appear a total of 18 times per season, 9 home games and 9 away games.

The table below shows coverage of the 2018/19 season. The last full season before the pandemic.

It's pretty clear the broadcasters are obsessed with the Big Six. This must stop.

In future each team's appearances ought to be capped at 5% of the total number of all club appearances . 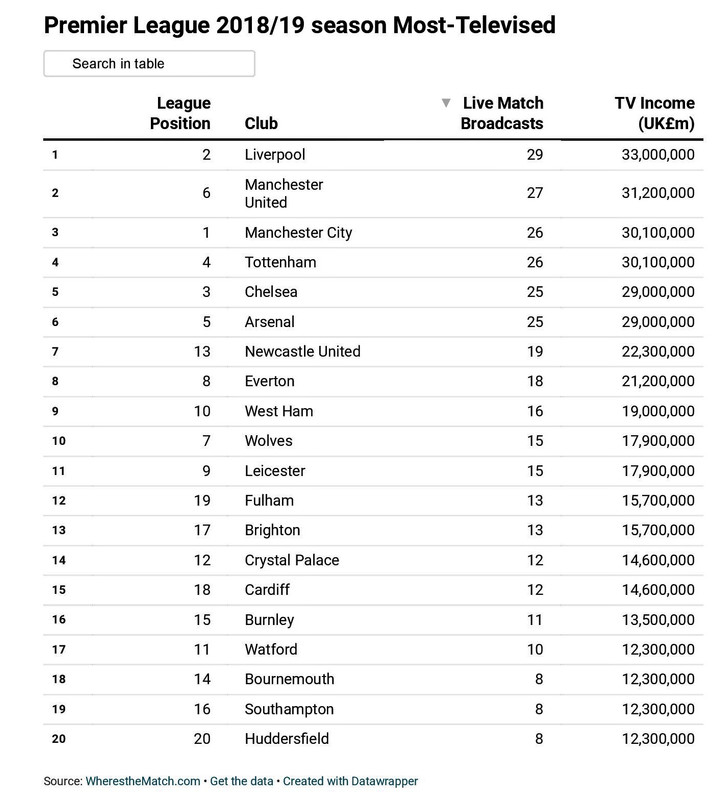 If Liverpool are going to replace Geni, I would like to see them try to get Bissouma from Brighton. He would not be too expensive and has great potential.

I know we should think more about our own poor season than this, but, wouldn't it be a small consolation if we can beat Manure today and snuff out their slim title hopes.

- UEFA are not the good guys.

- FIFA are not the good guys.

- The Premier League are not the good guys.

- The FA are not the good guys.

- Sky Sports are not the good guys.

- Boris Johnson is not a good guy.

- Gary Neville is not a good guy.

I'd add - The national press are not the good guys.

Klopp was laughed at for calling for calm last week. 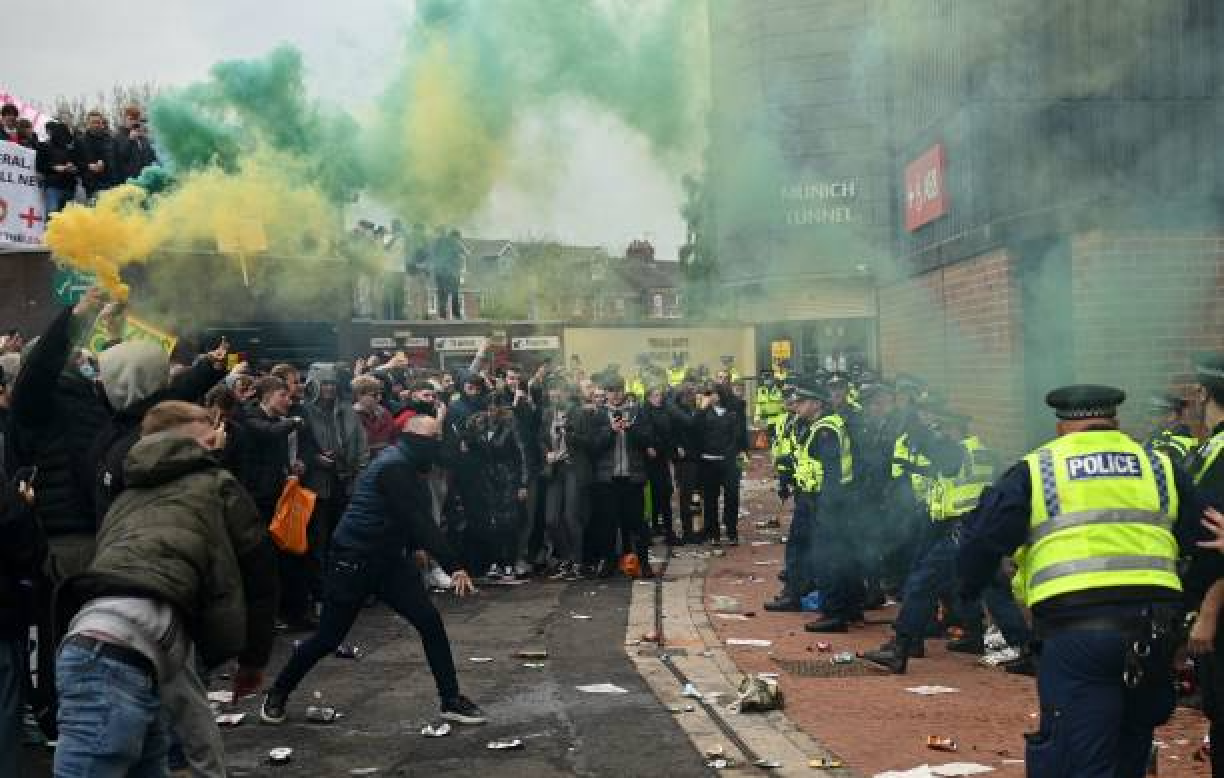 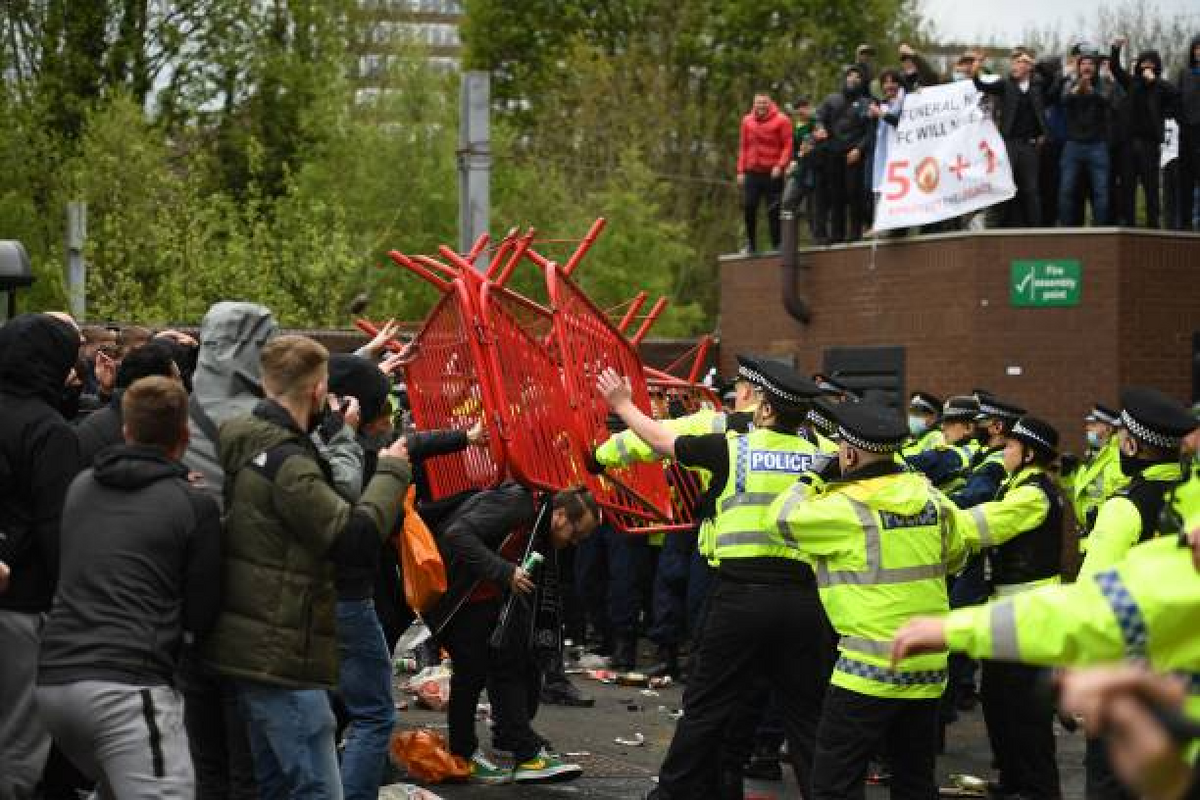 Excerpts from an article by Matthew Chandler on the Sports Quotes and Facts site.

"The Premier League was officially founded on February 20, 1992, after clubs in England’s top tier, the First Division, decided to break away from the
Football League, founded in 1888.

Among the clubs’ main motivations for creating the Premier League was the incentive of an incredibly lucrative television rights deal. Greg Dyke, then-managing director of London Weekend Television (LWT) hold already spoken in 1990 about the financial advantages of screening the biggest English teams’ matches on national television.

A proposal for a new league was then tabled following the end of the 1990-91 season, with the Founder Members Agreement signed on July 17, 1991 by the clubs involved, establishing its commercial independence from the rest of the English football pyramid.

A year later, the First Division clubs resigned from the Football League, before the ‘FA Premier League’ was formed as a limited company working out of an FA office."

"The Big Six" trying to consign 30 years of Football History to the dustbin. What were they thinking of?
Top
Post Reply
3181 posts