Can anyone help with information about Ronald Heys? According to Owen, Evan, What Happened Today Vol 2 (Blackwell, 1967) Heys was awarded the British Empire Medal for carrying on though injured in his work as a cycle messanger for the fire service during the fire bombing of Bootle on May 7th 1941. He was 16. Evans gives a detailed account of his heroism but I cannot find anything about Heys when I search google nor can I find his name on the list of BEM holders for 1941 or 1942. I find it hard to believe that Owen just made the story up but it is very odd that nothing shows on the searches.
Top

Some background on Ronald
he was born in the lodge of the north park son of park keeper
attended bootle grammar as a fire messanger he was blasted
of his bike and had more than 5 more damaged
and knocked unconscious his job under bombings was to take messages be tween thev fire station and pumps also meet incoming brigades
for his devotion to duty he was awarded the British Empire Medal
the youngest in merseyside and the country
he worked as a cub reporter for the bootle times
Ron served at sea for 28 years as captain on Ocean Monarch , Nova Scotia Queen of Bermuda
then became dock master Garston till 1987
i think i have a photo of ronald
what a brave kid only 15
as brave as May Logan
bobhamo
bootle born altcar road
Top

Welcome to the forum, FavellLea and thanks for the story of a true hero, Bob.

Welcome to the forum, FavellLea
Great bit of history Bob Thanks
Top

Ron married my mum in 1970. So he became out stepfather and Granpa to my children.

My father worked for Furness Withy, sailing on the Newfoundland and the Novascotia and thus with Ron.
So Ron and he were friends from about 1950.
I remember visiting him at his flat overlooking the 5 Lamps in Crosby in the early '50s I think and he visiting us quite frequently until his posting to the Ocean Monarch which sailed between New York and Bermuda.

Obviously I know lots more - however the medal he was given for his Fire Messenger exploits was:

So if further info is needed ask. His sister Marjory became an honary Gran to my family - so we have info there too.
Top

Hope you can see this 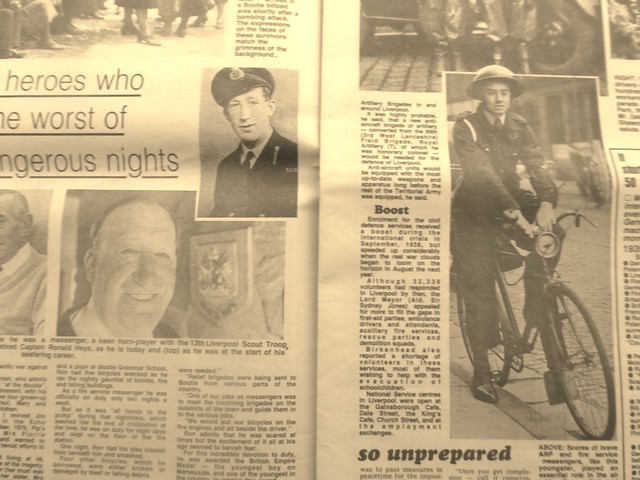 My Dad aged15 in May 1941 was in the Walkers Linacre Mission with Dwarf Sonnie Ross the night the Bryant and May Match Factory was hit opposite. Both were Cyclists Messangers.
Dad always maintained his mate was given the Bravery award and not him.
This could be that record.
Top
Post Reply
9 posts • Page 1 of 1