Peter W - The Policing of BOOTLE (The Early Years)

my only run in with the law was when my friend and i were larking about in the doorway of the maypole down strand road and we cracked the side window and we actually went to find a policeman and told him what we had done. he stood guard in the doorway until someone arrived to see to it. me and my friend had to go to bootle police station the next night and were given a caution.
Top

Bad Girl, Annie. Shame on you. You and your gang of one must have had the police on full alert, all leave cancelled.
Hi Peter, were you acquainted with my good old friend, George Wright ?
Good story about a great man, Constable Dalgano.
R R
Top

I knew two George Wrights. One especially, was George Wright ex Painter and decorator (Like me) He had a deep loud voice. We used to rib him saying you dont need a fog horn with George around. Great guy!.
Top

Hi Peter, got him in one. He was a gentleman was George. First met him when he came out of aprenticeship as a painter. Played footy with George. ( Not actually with George, with a ball. Had to get that in before it reached the Maghull Hottentot ) He was my boss's relative. Often met him throughout his police career. He always had time to chat about younger days. Terrific man. Please pass on my regards if you come across him.
Cheers, R R
Top

Great posts to this thread.

Thanks Peter for the info, what a very brave man going on them railway lines, I am glad he got recognition for what he did, tragic about the theft though.

My ex bro-in law was a scuffer at Admiral Street (I think) well retired now, I think he retired very early due to ill health back in the 1980's or before.

Mike Mulreanan (not sure of spelling).

Hi Jan
I remember Mick Mulrennan very well as we used to work together at Belle Vale Police Station in the mid 1960's. I bought a push bike off him, you know, one of those typical police 'sit-up-and-beg' ones which probably weighed as much as a small motor car. As I recall I gave him Â£10 for it and I was robbed!
Peter D
Top

I have not seen Mike for years, his wife is my ex sis-in-law.

I used to live in Belle Vale, that was in the early 80's though, I didn't know Mike had been stationed there, I always thought it was Admiral Street, but I didn't really talk to him about his job, he retired quite some time ago now.

Jan
The last conversation I had with Mick was when I worked at Admiral Street back in the 1980's. He told me that he had had ill health but intended to soldier on to get his 25 years pensionable service in.(all changed now of course).
Due to divisional changes, brought about by local government reorganisation, lots of us were moved around the force which is probably why Mick moved to Admiral Street. I also seem to recall bumping into him at Hope Street police station. If you should see him tell him I want my Â£10 back!

I have only just joined the forum so haven't caught up with all the correspondence re. the police. A lot of bells started ringing though, because I was in the Liverpool and Bootle force 1968-72, first as a cadet and then was posted to E division Lower Lane. It was there that I came across Dougie Carruthers, who was Sgt 28E if memory serves. I also knew his younger brother, Alan, really well as we both went to St matthew's church. Dougie was a great guy - very inspiring and lots of fun. When a very young constable he took me round many of the pubs (called "pegging") and to be honest we usually ended up having a drink in most of them! Dougie was ex-Irish Guards so maybe that explains it.
As a cadet I did do a spell at Oriel Road, where I was out in the panda with Ronnie Carter doing the 3 shifts...again "very interesting" !! (can't divulge it here though). Sergeants were Doran and Milne I seem to remember..oh and Ted Beattie. There was a film called "Sergeants Three" at that time, and everyone related that to them.
All has changed now of course...uniforms, radios and everything, and of course procedures are much tighter so I guess maybe nowadays things have improved. But I bet they don't have half the fun we had!!
Thanks Peter and all the correspondents. Maybe we'll get some more responses from this now.
Born Bootle 1951. St Matthews Church Lifeboys, BB, choir and youth club 1959 - 1968. Liverpool and Bootle police cadets and constable 1968 -1972.
Top

Mike is sadly no longer with us, I heard from another relative that he passed away early last year. I don't really keep in touch with that side of the family so I don't know any other details.

Hi Jan
I too had forgotten about the Mick Mulrennan aspect of this topic, but it was over two years ago! I have just had to renew my password for this site yet again having forgotten my last one. Senior moments or what?
Sorry to learn about Mick's passing, no chance of getting my £10 back then?
Peter D
Top

Interesting thread.
Did any of you retired officers remember two "jacks' from Bootle named Jack Johnson and Norman Bolton ?
This would be late 50s to mid 60s
Friends of the family when I was a kid
Thanks
Brian
Top

Sorry Brian, neither of the names you mention ring any bells. But then, I joined Liverpool City Police and the amalgamation with Bootle did not take place until 1967. Peter Woolley may be able to help though.

Brian, Peter D is correct. Peter Woolley is the person to contact.
In 'Images of England BOOTLE and ORRELL' ISBN 0-7524-3360-1
on page 46 is a picture of Bootle Police swimming team. Jack Johnson is one of the team.

If Peter Woolley reads this post. Thanks Peter for your various books of Bootle archive photographs, They are a joy. Dave s
Top Thanks for the tips
brian
Top

Lancashire records office (Preston) have records of Lancashire Police, I don't know if they will cover Bootle or not.

Yes I know Jack Johnson, but have not seen Norman Bolton for a while.

If you send me some details of your Grandfathers name and if possible his collar number, date he retired if he served in Bootle Police I will see what I can dig out.

I do have a number of photographs of bobbies dating from 1888 to the present day.
Top

Not sure if anyone will see this as I was just searching stuff online about my dad and noticed these posting which I think refer to him Constable George Wright. Originally a painter and decorator lol and boy have we heard some of the funny stories. Dad also played football usually goal keeper back in the day. He also played bowls and table tennis for the police. His nickname by the kids around Marsh Lane was batman because he wore a cape. When he got married to my mum they lived next door to Dougie Carruthers. He still tells his different stories.
Top

Your Dad worked for the corpy as a painter ,dec
he was a few years older than me but i remember him
Bobby Bellew , Arthur , scarasbrick where his age group
just cant remember for now
Joe KIng was forman ,Jack Brimage who became forman
Matt Gibbons, Bob Jones these where the charge hands 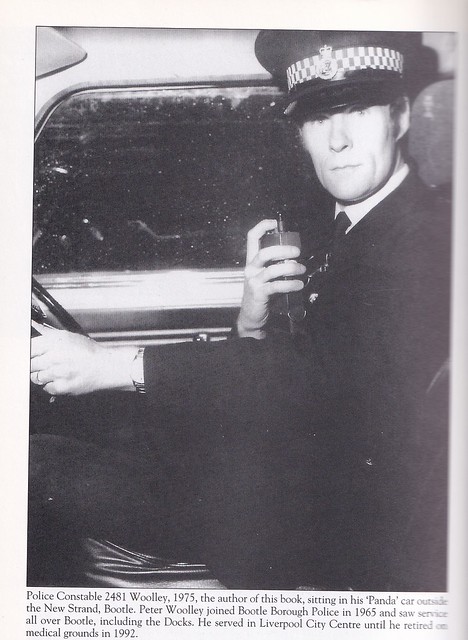 Great to see this old thread being resurrected.

Peter came to one of our meet ups at the Bootle YMCA back in 2007 on May the 27th and handed me this fabulous certificate in a frame which had the Bootle Coat of Arms on it with making me the custodial of Bootle's History for the future.

Been keeping it online since then as a web forum in honour of Peter and all our great members Past and Present. 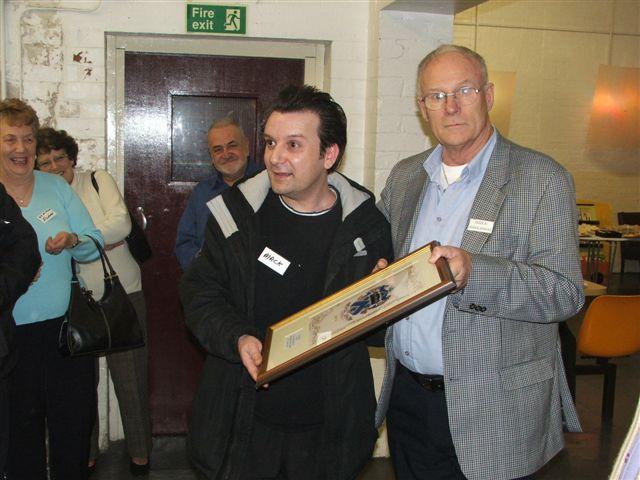 Nice pic Mac.
You know, that’s the first time I’ve seen a picture of you albeit from 2007

I think Mack has been doing "Banksy" Ken!!! All revealed now Mack!!!

Yikes, Loretta! - LOL. Yup I was last spotted creating artwork in the Bootle Time Tunnel back of the Bootle New Strand.

I was in disguise up a ladder and painting stuff using scaffolding. Don't tell anyone though

I'm surprised you've still got all of your hair, running this site Mack.

I was in disguise up a ladder and painting stuff using scaffolding. Don't tell anyone though

Well done Mack, and this despite our best efforts.

On looking at the old piccy of Peter Woolley and reminiscing again I thought he was about to arrest me being a copper LOL, it was a complete surprise. Peter was a lovely fella with amazing history. He then handed me the certificate and I then legged it out of the building... sirens screeching, bizzies everywhere...

George Wright, that's a name from the past, I joined the Job in 1975 and was posted to Marsh lane, George was a lovely fella, my one memory of him was he was always laughing !! he never seemed to take anything serious including the bosses !.

As you mentioned he still wore his old cape when he went out on patrol, he was one of life's characters, something the world is definitely lacking.

My report got as far as the Chief Inspector at Marsh Lane, who coincidentally had just returned from a " Man Management" course at Bramshill, he had wrote in capital letters the word " NO " refusing my application, his reason being this date was Grand National day and we in Bootle were responsible for the Policing of it.

My section Sergeant sat me down at the typewriter telling me " We are requesting an interview with the Chief Constable " the report was duly returned from Ken Oxford ( Chief Constable ) with the word " GRANTED " in capital letters, and asking if the interview with him was still required, I in turn typed in capital letters " NO ". Ah well, 41 years later, the rest is history.

Marsh Lane / Bootle was a super place to work, lots of variety including the people, being Bootle born and bred and all my immediate family still living in Bootle / Litherland I felt at home.

OMG I thought I would get a ping or something to say the post was active again and am kicking myself now.
Loved hearing about my dad and your all so spot on. I take after him, hear before you see lol
Sadly I didnt get to tell dad about this post as I have just seen it now and he passed away on 20 January 2021.
Your posts have made me smile and I will be showing them to mum

Nice to see the photographs of your Dad, the top one shows him in company with Sgt Ted Beattie , he was another of life's characters, it is ironic there is a bottle of sherry on the table in front of your Dad, as I distinctly remember him asking for a " Sherry Shandy " one night in the bar at Marsh Lane !

You have a good memory John he was partial to sherry lol. Ted was the whisky drinker

I remember when he did tutor con for many years they all visited our house for a break ... He kept his hand in with painting as one year he painted the cells at Copy Lane. Wouldn't happen now.
Take care
Top
Post Reply
67 posts